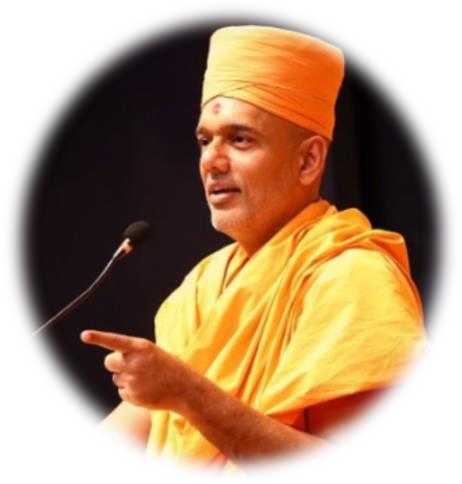 By his profound knowledge and insights on a wide spectrum of subjects, Sadhu Gnanvatsaldas has participated in various conferences and inspired millions of people across India, USA, Europe, Canada, Australia and New Zealand. He has been one of the most popular motivational speakers from BAPS creating an everlasting positive impact in people’s lives transforming their intellectual quotient, emotional quotient and spiritual quotient.

He served as an interpreter with earlier BAPS Spiritual Head HH Pramukh Swami Maharaj in many of his religious world tours. He has been instrumental in carrying out many Youth Development and Social, Cultural projects of BAPS at Vadodara, Gujarat, India.

Since 1992. He was initiated as a sadhu by His Holiness Pramukh Swami Maharaj, the Fifth Spiritual Successor of Bhagwan Swaminarayan and then BAPS Spiritual Head during inauguration festival of Swaminarayan Akshardham, Gandhinagar, Gujarat, India.

A socio spiritual organization from India with more than 162 humanitarian activities in more than 60 countries. Also, in consultative status with the United Nations.

He conducted special lecture series for 4 years in Mumbai for an esteemed audience from 2009 to 2012. He also has spoken in many NGOs, colleges and universities across India and outside.

Bochasanwasi Akshar Purushottam Swaminarayan Sanstha (BAPS) is a socio-spiritual volunteer- driven Hindu organization with its roots in the Vedas and dedicated to improving society through individual growth by fostering Hindu ideals of faith, unity and selfless service. Founded on the pillars of practical spirituality, the BAPS reaches out far and wide to address the spiritual, moral and social challenges and issues we face in our world. Its strength lies in the purity of its nature and purpose.

BAPS strives to care for the world by caring for societies, families and individuals. Its universal work through a worldwide network of over 3,850 centers and more than 1100 temples has received many national and international awards and affiliation with the United Nations.

BAPS Global Network comprises of its epoch-making cultural centers such as Swaminarayan Akshardham at New Delhi and Gandhinagar and traditional Hindu temples at Atlanta, Auckland, Chicago, Houston, Los Angeles, Nairobi, Robbinsville, Sydney, Toronto and many others.

BAPS Swaminarayan Sanstha is a registered and reputed Charitable Trust in India, and an NGO in Consultative Status with the EcoSoC of the United Nations.

HH Pramukh Swami Maharaj (1921-2016), fifth spiritual guru and BAPS head, inspired millions of devotees and initiated over 1000 sadhus to maintain moral and spiritual lifestyles. He steered the reins of BAPS for many decades, effectively administering its spiritual, cultural, personal development and humanitarian activities.

HH Mahant Swami Maharaj (1933-till date) is the sixth and present spiritual Guru of BAPS. He presides as the spiritual guide of countless devotees and helms the worldwide socio-spiritual activities of BAPS Swaminarayan Sanstha.

Retrieved from "https://en.everybodywiki.com/index.php?title=Sadhu_Gnanvatsaldas&oldid=1033186"
Hidden categories:
This page was last edited on 7 October 2020, at 08:25.
This page has been accessed 564 times.
Content is available under License CC BY-SA 3.0 unless otherwise noted.
Privacy policy
About EverybodyWiki Bios & Wiki
Disclaimers