The .460 Rowland is a pistol cartridge that was designed to enable .44 Magnum performance in lightweight, high-capacity, semi-automatic handguns.[2] Converted handguns are powerful enough to be used for handgun hunting, a field dominated by large-caliber revolvers.[3]

The .460 Rowland was designed and trademarked by Johnny Ray Rowland, host of The Shooting Show. Rowland brought the idea for the cartridge to his friend and noted pistol-smith Jim Clark to develop the conversion. Rowland then collaborated with Starline Brass to finalize commercial production of the casings. He first commercially distributed ammunition and conversions for the 1911 semi-automatic handgun in 1998 and became a partner in .460 Rowland LLC (Tulsa, Oklahoma).

The .460 Rowland case is approximately 1/16" longer than a conventional .45 ACP case, but the overall cartridge length is the same; the bullet is simply seated more deeply. The purpose of the extended case length is to prevent the high pressure .460 Rowland from being chambered in a standard firearm chambered for the low pressure .45 ACP.

The .460 Rowland cartridge sharply increases chamber pressure and gas volume when compared to .45 ACP cartridges, which drives projectiles to much higher velocities than a .45 ACP. A compensator on the muzzle-end is required to momentarily lock slide action in order to vent gas pressure, allowing the slide to operate under near normal pressures. Higher chamber pressures deliver magnum level performance while the imperceptible delay in slide action allows the cartridge to be fired from many compact, lightweight, high capacity, autoloading pistols. 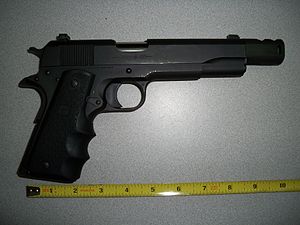 Model 1911 pistol with .460 Rowland conversion. The 1.5" compensator works in conjunction with a 22 to 24 pound recoil spring to control slide velocity and recoil.

Autoloaders converted to fire the .460 Rowland Cartridge require a properly designed compensator or ported barrel. Ported barrels have proven viable in managing the power of the cartridge, but result in somewhat more muzzle flip and felt recoil.[4] Ported barrels can be more readily installed or removed from the slide (moot in a 1911 due to its design)—legal in restrictive states like California—without needing to permanently secure the compensator to the barrel.[4][5]

High quality 1911s are manufactured by many different companies and tolerances vary with each manufacturer. It is necessary to adjust recoil spring tensions and to identify specific magazines that work best in each gun. This must be done when converting a 1911 to fire the .460 Rowland cartridge. The company says a properly designed conversion requires an effective compensator to momentarily delay slide action and allow very high pressures and volumes of gas to dissipate to manageable levels before slide action may begin. Without this compensation, slide or frame failure will likely result over time and reliability will suffer in the short term.[4]

The Ruger Blackhawk and Smith & Wesson Model 25/625 can also be chambered to fire the .460 Rowland. Converting these revolvers requires deepening the chambers and is effectively permanent, unless the owner has a replacement cylinder fitted. For several years Dan Wesson also made a revolver specifically for the .460 Rowland, which would also chamber .45 ACP, .45 Super and .45 Winchester Magnum, as does the Smith & Wesson Model 25/625. Both guns use moon clips to enable ejection of rimless cartridges.

Retrieved from "https://en.everybodywiki.com/index.php?title=.460_Rowland&oldid=845667"
Categories:
This page was last edited on 13 July 2020, at 14:14.
This page has been accessed 4,549 times.
Content is available under License CC BY-SA 3.0 unless otherwise noted.
Privacy policy
About EverybodyWiki Bios & Wiki
Disclaimers