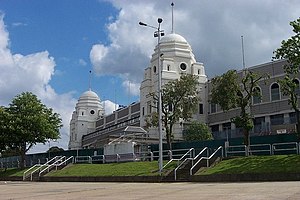 The match took place on a sunny April afternoon, fans of both sheffield teams headed down to London for an early kick off. It was the first time that Sheffield United had played at Wembley since 1936. The match commanded so much demand that the match venue was changed from Elland Road to Wembley.

Chris Waddle gave Wednesday the early lead after 62 seconds with a free-kick; the player of the year then proceeded to lead the play. Wednesday couldn't add a second, though, and it was Waddle who played ramblin' man Alan Cork onside for an unlikely equaliser just before half-time.

United held on through 90 minutes, but eventually lost in extra time, Mark Bright scoring the winner with a Bassettesque set-piece header.

The Owls would go on to lose the Cup final to Arsenal after a replay, their second final loss in the same year to the Gunners after they were beaten in the League Cup final.

Today the match is regarded as one of the biggest games in the Steel City derby.

Retrieved from "https://en.everybodywiki.com/index.php?title=1993_FA_Cup_Semi-Final&oldid=846023"
Hidden categories:
This page was last edited on 13 July 2020, at 16:08.
This page has been accessed 311 times.
Content is available under License CC BY-SA 3.0 unless otherwise noted.
Privacy policy
About EverybodyWiki Bios & Wiki
Disclaimers