The 2008 Chick-fil-A College Kickoff took place on August 30, 2008, in the Georgia Dome in Atlanta, Georgia. This was the first game of the Chick-fil-A Kickoff Game series. The game featured the No. 9[A] Clemson Tigers and the No. 24[A] Alabama Crimson Tide.

The Clemson Tigers football team entered at 4.5 point favorites over the Crimson Tide. Clemson was led by head coach Tommy Bowden who was in tenth season as head coach of the team. In their 2007 season, the Tigers finished with a 9–4 record, which ended with a 23–20 overtime loss in the 2007 Chick-fil-A Bowl to, Alabama's rivals, Auburn. Clemson entered the game with running backs James Davis and C. J. Spiller, who were referred to as "Thunder" and "Lightning" respectively.[3]

Clemson lines up on offense 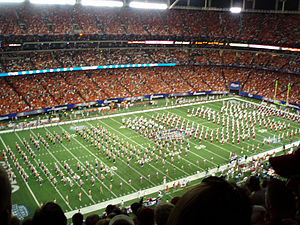 The Tigers band and the Million Dollar Band performing the national anthem prior to kickoff.

The Clemson Tigers, the preseason favorite to win the ACC, were favored going into the season opener at the Georgia Dome. Some believed that the Crimson Tide's youth and inexperience would prove a serious disadvantage against an experienced team like Clemson. However, Alabama quickly took control in what would eventually be a lopsided victory. By the end of the first quarter, Bama led 13–0, and they extended their lead to 23–3 by halftime. The only scare came when C.J. Spiller returned the second half kickoff 96 yards for a touchdown. However, the Tigers failed to score again. James Davis and C.J. Spiller combined for only 20 yards on the ground, while the team's rushing total was 0. Clemson's redshirt senior quarterback, Cullen Harper, completed 20 of 34 passes but had no touchdowns and one interception. Alabama's John Parker Wilson completed 22 of 30 passes with no interceptions. He threw two touchdowns to Nick Walker and Julio Jones, and rushed for one himself. The Crimson Tide Tide went on to win by a score of 34–10.

The interior of the Georgia Dome prior to kickoff.

A. ^ : Rankings reflect those of the AP Poll at the time of the game.

Retrieved from "https://en.everybodywiki.com/index.php?title=2008_Chick-fil-A_Kickoff_Game&oldid=1798663"
Categories:
Hidden categories:
This page was last edited on 7 October 2014, at 17:33.
This page has been accessed 38 times.
Content is available under License CC BY-SA 3.0 unless otherwise noted.
Privacy policy
About EverybodyWiki Bios & Wiki
Disclaimers