The 2018 Speed Chess Championship (SCC) was a 16-player chess single-elimination tournament hosted by chess.com to determine the speed chess champion of 2018. The 3rd edition of the tournament (and 2nd with the new name) began on June 26 with the Invitational Qualifier and ended on December 2 with the final where Hikaru Nakamura defeated Wesley So with a score of 15.5–12.5.[1][2][3] 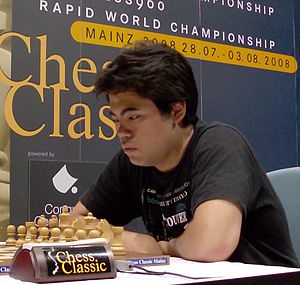 Hikaru Nakamura making his third appearance in the tournament.

The following four players were selected by chess.com to partake in the Invitational Qualifier.[6]

The Invitational Qualifier started on June 26 with the selected players being paired based on their chess.com blitz rating. The following format was used:[7]

With Domínguez's victory over Hammer, he has guaranteed himself a spot in the SCC.[8]

The Open Qualifier began on July 10 and consisted of a 10-round swiss-system tournament using 3|1 blitz format. Only titled players 2500 and above participated and even players who already qualified for the SCC could partake. The winner of the Open Qualifier obtained the final spot to qualify for the SCC.[9]

Since Anish Giri already has a spot in the SCC, 2nd-place finisher Zaven Andriasyan qualified.[10]

Despite Aronian being winless in the first round (0-2) and being the lower seed, SmarterChess favored Aronian due to his blitz skills and his ability to pull wins in time trouble.

The match started on the wrong road for Aronian as he lost his first game; nevertheless, he went on an unbeaten streak (+5-0=2) which included winning three straight games thanks to blunders by Caruana in time trouble to have a four-game lead after the 5|2 portion.

The match continue to favor Aronian as he won three straight to open the 3|1 segment before losing only his second game of the entire match. However, Caruana's momentum didn't continue after a quick draw as he lost another three straight games which included getting crushed in the KIA. In spite of that, Caruana won his final game of the 3|1 portion, yet was down eight games going into the 1|1 portion.

With Aronian winning over Caruana, he won his first game in SCC play and became the first player to pull an upset [1] in the first round (and only the third upset in SCC history).

Before the match, Nakamura was considered a huge favorite due to the fact that he is widely regarded as a dominant player when it comes to the 3|1 and 1|1 portion and plays regularly on chess.com which could help when it comes to time trouble situations.

Nakamura started off hot, notching four straight wins before drawing twice. Throughout the 5|1 portion, Hou was in under constant time pressure which caused her to mishandle equal positions. Additionally, missed tactics caused her to not convert for the full point and instead she settled for draws.

The lead started to escalate as Nakamura obliterated Hou, winning all the 3|1 games due to once again poor time management by Hou which caused her to err in all of the 3|1 games.

Within the 1|1 segment, Hou once again struggled with time management as her clock played a big issue when it came to detecting quality moves while Nakamura's experience in bullet allowed him to find tactics briskly. In spite of that, Hou was able to end a record-high eighteen game losing streak with a draw.

Several records were either matched or broken such as the lowest number of points scored (2.5), the losing side not recording a win in the entire match, one person winning all the 3|1 games, the longest winning streak (18), and the most points scored (27.5).

On paper, this matchup featured an elite player against an unknown prodigy with SmarterChess favored So based on his experience playing on chess.com compared to Wei who rarely plays online.

After a swift draw which started the 5|1 section, Wei started in the win column when he scored the first two wins of the match. However, So settled in and racked up five straight games which included a beautiful tactic to save a game Wei was winning. Throughout the 5|1 portion, time management was an issue for Wei especially during the five game skid which caused him to get "flagged".

So sustained pressure on Wei by winning four straight and ended up going +6-0=2 in the 3|1 format. Once again, Wei got solid or even winning position, but took too much time on certain moves which caused his position to disintegrate when he didn't have enough time to make moves.

Wei attempted to make his comeback and started off well by winning his first two bullet games but drawn positions and faulty time management by Wei allowed the game clock to run out and sent So to the quarterfinals.

With So winning the 3|1 portion, he's the only player to win every 3|1 portion he's played in (3-0) which includes winning against Magnus Carlsen last year.

Both players have experience playing against other elite players especially Domínguez Pérez who plays regularly on chess.com however SmarterChess predicted Vachier-Lagrave to win based on his experience in the SCC.

Starting in the 5|1 portion, both sides took shots at each other with both player making one move blunders in their losses or displaying beautiful endgame techniques in their wins or draws. Nevertheless, Vachier-Lagrave was able to pull away with wins in the final two 5|1 games due to appalling time management by Domínguez Pérez.

In the 3|1 portion, it was all about streaks when Domínguez Pérez secured the first two games to tie up the match; however, Vachier-Lagrave rebounded with three straight victories thanks to being able to outplay Domínguez Pérez in key situations. Despite that, Domínugez Pérez was able to cut the lead in half when he took the final two games to end the 3|1 segment down one.

However, Domínguez Pérez couldn't keep up with Vachier-Lagrave's pace in the 1|1 portion as he kept making horrendous blunders and spent too much time trying to make the best move.

Theoretically, both players were eminent blitz player with both being ranked in the top ten in blitz; even so, SmarterChess favored Grischuk based on his experience playing against tough competition in the SCC.

Both players met their match in the 5|1 segment with both players showing their personal styles when they won. Grischuk used position sacrifices to pull for the victory, but struggled with his time management while Nepomniachtchi went all in for the attack; however, his atrocious opening choices ended up putting him in a lot of trouble. In a wild back-and-forth affair, the 5|1 portion ended in a tie.

During the 3|1 portion, Grischuk slowly started to outplay Nepomniachtchi especially when he loss whether it was early in the opening or in the endgame when he made one move blunders. Anyhow, Nepomniachtchi won the final 3|1 game only being down three going into the 1|1 segment.

Despite that, Grischuk vanquished Nepomniachtchi in the 1|1 segment as Nepomniachtchi was once again outplayed as simple oversights costed him a plethora of games.

According to SmarterChess this matchup was predicted to be close considering that both players had no experience playing in the SCC although both players took part in the PRO Chess League. Despite that, Gujarathi was considered the favorite by virtue of being the superior chess player compared to Andriasyan.

Knowing Andriasian was an underdog going into the match, he started out the match by winning the first two games thanks to poor time management by Gujirthi which allowed counterplay to Andriasian. However, Gujirthi quickly homed in by putting pressure on Andriasian as he eventually tied up the match. As the 5|1 portion continued, both players showed their inexperience when they had chances to garner advantages, but they couldn't locate them in time trouble.

During the 3|1 segment, Andriasian blundered his rook in the endgame which allowed Gujirthi to tie the match in game one. Nevertheless, while Gujirthi had some outstanding games where he continued to apply pressure on Andriasian, he was criticized throughout the 3|1 portion by commentators and fans for not taking any chances when it looked like he had winning positions; instead taking draws which allowed Andriasian to stay in the match. Andriasian capitalized on this advantage when he prevailed in the final 3|1 game; tying the match for the first time in SCC history going into the 1|1 segment.

After both sides players blundered in the first two bullet games, the score was tied at nine apiece. However, Gujirthi put all of the criticism aside when he went on a clinic; winning seven straight games. With Gujirthi creating complicated positions, Andriasian struggled with time trouble; allowing the winning streak to continue as Andriasian could not recover from his losses.

Before the match, many people saw a huge mismatch between one of the best elite players in the world against a rising star in Duda. According to SmarterChess, it was predicted Karjakin would cruise his way through the first round.

Both players were solid in their games with most of their victories coming in the endgame. Karjakin stayed true to his reputation as he was able to defend certain positions while taking advantage of Duda's blunders while Duda used a lot of creatively to find bold moves in order to win. However, Karjakin was able to win the last two games to take a two-point lead going into the 3|1 segment.

In the 3|1 portion, both players won five consecutive games with the white pieces as both players with the black pieces could not find ways to defend. Throughout the segment, Duda struggled with time management while Karjakin seemed to put himself in worse positions. This would lead to unpredictable endgames where Duda would be able to squeak a couple of victories to tie the match.

Duda started off with a hot start, winning the first two bullet games which gave him a two-point lead. Karjakin would gain the initiative, but was unable to convert it into wins. After a draw, Karjakin got his first win in the bullet section; however, Duda would win the next two games to have a three-point lead with less than five minutes to play; good enough to win the match.

After the game, many people have called this “the greatest upset in SCC history” as Karjakin was a huge favorite to challenge Nakamura in the finals. In addition, this is the first time SmarterChess prediction was incorrect as it too picked Karjakin to win.

Despite Anish Giri gaining a top four seed due to his dominant performance in the Open Qualifier, SmarterChess predicted Mamedyarov winning due his hot performance in over-the-board tournament, especially during his 2017-18 campaign.

Giri started out of the gates with two straight wins as he dominated the Pirc Defense while squeaking out of an endgame. After two draws, Giri again won the next two games by putting pressure on Mamedyarov's positions. At the end, he had a four-point lead entering the 3|1 segment.

The 3|1 portion didn't go well for Mamedyarov either as he lost the first two games. Mamedyarov seemed to look lost in positions while Giri, typically a drawish player, took the initiative. After six straight draws and eventually another loss, Mamedyarov won the final three games to still be down four entering the bullet section.

Throughout the 1|1 portion, Mamedyarov was clearly the better bullet player as he was quick when making decisions, but there were too many losses to overcome as Giri forced enough draws to win the match.

Giri showed his aggression against Mamedyarov compared to his solid defensive approach in over-the-board. With the win, SmarterChess was once again wrong with its prediction and Giri moved on to the quarterfinals for the first time in his career.

Retrieved from "https://en.everybodywiki.com/index.php?title=2018_Speed_Chess_Championship&oldid=1006540"
Categories:
Hidden categories:
This page was last edited on 15 September 2020, at 11:10.
This page has been accessed 140 times.
Content is available under License CC BY-SA 3.0 unless otherwise noted.
Privacy policy
About EverybodyWiki Bios & Wiki
Disclaimers