The 2019 Canadian Championship Final is a two-legged series to determine the winner of the 2019 Canadian Championship, Canada's primary domestic cup competition in men's soccer. The series will be played between Canadian Classique rivals Montreal Impact and Toronto FC, both members of Major League Soccer. It is the third time Montreal and Toronto have met in the finals since the cup format was adopted in 2011; with the Impact winning in 2014, and Toronto winning in 2017.[1]

The winner will qualify for the 2020 CONCACAF Champions League as Canada's sole direct entrant.[3]

Saputo Stadium in Montreal will host the first leg
Capacity: 19,619 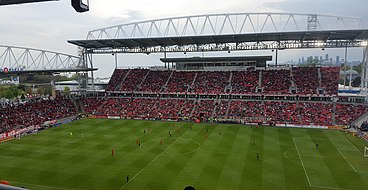 BMO Field in Toronto will host the second leg
Capacity: 30,991

This will be the third time Montreal Impact and Toronto FC have faced one another in the Canadian Championship final. The first time, in 2014, Montreal Impact won 2–1 over two legs to win the Voyageurs Cup and advance to the 2014–15 CONCACAF Champions League. Montreal subsequently made it to the Champions League final, where they were ultimately defeated by Mexican club América.

The most recent finals meeting took place in 2017, where Toronto FC won 3–2 on aggregate. Toronto also advanced to the CONCACAF Champions League final after having qualified through the Canadian Championship. Toronto lost to Guadalajara on penalties in the final.

Montreal Impact were drawn into the third qualifying round where they played Canadian Premier League side York9 FC from Toronto. Over two legs, they defeated York9 3–2 on aggregate to advance to the semi-finals.[4] In the semi-finals they went on to play another CPL side, Cavalry FC from Calgary, who had just defeated fellow MLS side Vancouver Whitecaps FC to advance to play the Impact. Montreal defeated Cavalry 2–1 in Montreal, and 1–0 in Calgary for a 3–1 aggregate victory to advance to the finals.[5]

As the defending champions, Toronto FC qualified directly to the semi-finals where they played the Ottawa Fury of the USL Championship. Toronto won the first leg 2–0 in Ottawa at TD Place Stadium, followed by a 3–0 victory at home one week later August 14 to win the series 5–0 on aggregate and advance to the finals.[6]