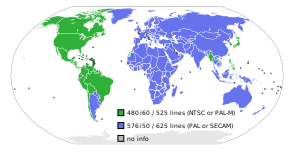 SDTV resolution by nation; countries using 576i are in blue.

576i is a standard-definition video mode originally used for broadcast television in most countries of the world where the utility frequency for electric power distribution is 50 Hz. Because of its close association with the color encoding system, it is often referred to as simply PAL, PAL/SECAM or SECAM when compared to its 60 Hz (typically, see PAL-M) NTSC-color-encoded counterpart, 480i. In digital applications it is usually referred to as "576i"; in analogue contexts it is often called "625 lines",[1] and the aspect ratio is usually 4:3 in analogue transmission and 16:9 in digital transmission.

The 576 identifies a vertical resolution of 576 lines, and the i identifies it as an interlaced resolution. The field rate, which is 50 Hz, is sometimes included when identifying the video mode, i.e. 576i50; another notation, endorsed by both the International Telecommunication Union in BT.601 and SMPTE in SMPTE 259M, includes the frame rate, as in 576i/25.

Its basic parameters common to both analogue and digital implementations are: 576 scan lines or vertical pixels of picture content, 25 frames (giving 50 fields) per second.

In analogue 49 additional lines without image content are added to the displayed frame of 576 lines to allow time for older cathode ray tube circuits to retrace for the next frame,[2] giving 625 lines per frame. Digital information not to be displayed as part of the image can be transmitted in the non-displayed lines; teletext and other services and test signals are often implemented.

Analogue television signals have no pixels; they are rastered in scan lines, but along each line the signal is continuous. In digital applications, the number of pixels per line is an arbitrary choice as long as it fulfils the sampling theorem. Values above about 500 pixels per line are enough for conventional free-to-air television; DVB-T, DVD and DV allow better values such as 704 or 720.

The video format can be transported by major digital television formats, ATSC, DVB and ISDB, and on DVD, and it supports aspect ratios of standard 4:3 and anamorphic 16:9.

In digital video applications, such as DVDs and digital broadcasting, color encoding is no longer significant; in that context, 576i means only

Use with progressive sources[edit]

When 576i is used to transmit content that was originally composed of 25 full progressive frames per second, the odd field of the frame is transmitted first. This is the opposite than of NTSC. Systems which recover progressive frames, or transcode video should ensure that this field order is obeyed, otherwise the recovered frame will consist of a field from one frame and a field from an adjacent frame, resulting in 'comb' interlacing artifacts.

This article "576i" is from Simple English Wikipedia. The list of its authors can be seen in its historical and/or the page Edithistory:576i.