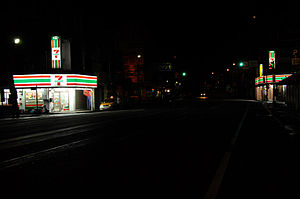 With the fourth highest 7-Eleven outlet density in the world,[1] it is not an unusual scene in Taiwan for two 7-Eleven shops to stand face to face across an intersection.[2]

In Taiwan, 7-Eleven is owned by President Chain Store Corporation under Uni-President Enterprises Corporation. The first 7-Eleven convenience store in Taiwan was opened in 1980, however, it was not until 1986 the company began to profit. 7-Eleven is the most popular convenience store in the country; Taiwan is third in the world for number of locations with 4,951 stores on April, 2014.[3] Although the number of 7-Eleven store in Taiwan is fewer than those of the United States and Japan, Taiwan 7-Eleven has one of the highest density of 8.5 km² a store in the world after Macau, Hong Kong and Singapore.

Popularity of 7-Eleven in Taiwan[edit]

There are numerous 7-Eleven stores in Taiwan. It has become a common occurrence for two 7-Eleven stores to be within close walking distance of each other in highly populated neighborhoods.

7-Eleven offers various services catering to all sorts of customer needs. 7-Elevens in Taiwan provide a wide and ever-changing scope of services depending on the environment and market trends. In addition to selling snacks, food, drinks, tobacco, magazines and other items typically available in a convenience store, 7-Elevens in Taiwan also provide services such as faxing, photo copying, and express mail. Additionally, customers can pay parking fees, traffic fines, and most utility and service bills at 7-Eleven.

Current services available in a 7-Eleven in Taiwan are listed below:

In fact, 7-Eleven is so convenient that it has become an integral part of Taiwanese culture. Eighty percent of urban household shoppers in Taiwan visit a convenience store each week.[4] The idea of being able to purchase food items, drinks, and magazines or to send a Takkyubin or a DHL 24 hours a day and at any corner of a street makes life easier for this extremely busy and rushed population.

Retrieved from "https://en.everybodywiki.com/index.php?title=7-Eleven_in_Taiwan&oldid=1799257"
Categories:
Hidden category:
This page was last edited on 14 May 2014, at 11:33.
This page has been accessed 28 times.
Content is available under License CC BY-SA 3.0 unless otherwise noted.
Privacy policy
About EverybodyWiki Bios & Wiki
Disclaimers