AWAKE Festival is an annual boutique festival that takes place in Gornești, Mureș county, at the Teleki Estate. The line-up represents a mixture of musical styles, with national and international acts coming mainly from the electronic and the rock music scene. Many other activities are being organized during the festival, such as: an open air library and cinema, Feed your Mind (a debate platform) and an international big art competition, Artdoor.

Teleki Estate is located in Transylvania and it encompasses 16 acres of land. The estate hosts an 18th century baroque castle and an English park with old trees and meadows, near the river Mureș. The castle is one of the best preserved in Transylvania and has many of its original pieces in place like Murano chandeliers, wood doors, fireplaces, murals and stucco works. A part of the castle has been refurbished with antique furniture in order to recreate the old atmosphere, which visitors can see throughout the year. 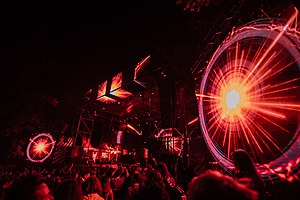 These acts performed on the Cube Main Stage, the River Stage and the Treehouse Stage. At the first edition there were also many other activities: the Forest Library, Artdoor (an international competition for big art installations), the Feed Your Mind platform, the Serenity Meadow (a space dedicated to physical and spiritual relaxation),the Baazar, the Bridge Cinema and the Playground. For it's second edition, AWAKE introduced a festival theme called New Funky Royals. People attending the festival are invited to follow this dress code by mixing and un-matching their articles of clothing. Like in the case of the previous edition, other activities will be organized too.