A Message from Earth 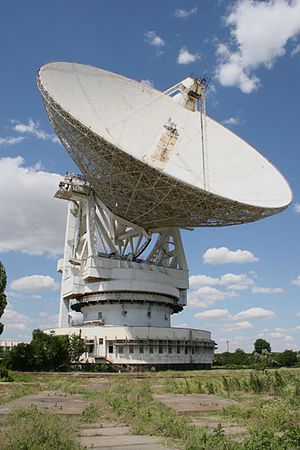 A Message from Earth (AMFE) is a high-powered digital radio signal that was sent on 9 October 2008 towards Gliese 581c, a large terrestrial extrasolar planet orbiting within the Gliese 581 system. The signal is a digital time capsule containing 501 messages that were selected through a competition on the social networking site Bebo. The message was sent using the RT-70 radar telescope. The signal will reach the planet Gliese 581c in early 2029.[1] More than half a million people including celebrities and politicians participated in the AMFE project, which was the world's first digital time capsule where the content was selected by the public.[2][3]

On 13 February 2015, scientists (including David Grinspoon, Seth Shostak, and David Brin) at an annual meeting of the American Association for the Advancement of Science, discussed Active SETI and whether transmitting a message to possible intelligent extraterrestrials in the Cosmos was a good idea;[5][6] That same week, a statement was released, signed by many in the SETI community, that a "worldwide scientific, political and humanitarian discussion must occur before any message is sent".[7] However neither Frank Drake, nor Seth Shostak signed this appeal. On 28 March 2015, a related essay with some different point of view was written by Seth Shostak and published in The New York Times.[8]

The idea for the project was raised by Oli Madgett of RDF Digital, who was later put in charge of its implementation. The purpose of the project was to "help capture young people's imaginations and inspire them to think about our own planet earth and humanity's impact upon it." The project was carried out by RDF Digital, a subsidiary of RDF Media Group, in partnership with the social networking site Bebo. RDF Digital originally planned to run the project through a stand-alone website, but later opted for a partnership with Bebo to help it to get more attention and spread the idea quickly.[3]

The main consultant for the AMFE project was Dr. Alexander L. Zaitsev, an expert in interstellar radio communication and Chief Scientist of the Radio Engineering and Electronics Institute of the Russian Academy of Science.[9]

The messages were selected in a competition hosted by Bebo, which more than 12 million Bebo users were invited to join. They were to be selected later through a web vote. An advanced third party application was developed for the AMFE project, which was integrated in Bebo's social network environment. Using this application, its users submitted text messages and pictures and drew images, which were translated into a binary format.[3] Originally, an idea of interstellar radio message composition by the public, using a special web site, was suggested by Alexander L. Zaitsev in 2002 in his abstract METI@home: Messages to ETI from home.[10]

Gliese 581c, a planet orbiting around the red dwarf star Gliese 581, was chosen as the target of the message. This planet was chosen since it was believed to be capable of supporting life. Gliese 581c is 20 light years away from Earth,[11] and the message would reach the planet in early 2029. The project was funded by advertisements, and the cost of $40,000 was borne by RDF Digital for the transmission which took four and a half hours.[3][12]

The A Message from Earth mission team in Yevpatoria comprised:

The project was launched on 4 August 2008. Bebo invited its users, celebrities and politicians to submit messages and pictures to be included in the digital time capsule. The submissions were expected to "consider the planet from a fresh perspective" and help raise awareness on environmental pressures on Earth.[12]

More than half a million Bebo users had gotten involved in the competition for selecting the messages, and had uploaded their messages onto the social networking site. Several celebrities were also involved in the project, including Sir Patrick Moore, Deborah Meaden, Gillian Anderson and pop band McFly.[2]

501 of the submitted text messages, photographs and drawings were selected to be transmitted in the digital time capsule. These messages were on various topics, such as the contributors' own lives and ambitions, world peace and views of the Earth.

The message also included images of notable landmarks, such as the London Eye and Edinburgh Castle, and of famous people, such as Hillary Clinton, Cheryl Cole and Richard and Judy.[1][2]

Experts' views on the messages indicated that even though the messages may seem unimportant, they will serve the purpose of conveying the message that there is intelligent life in Earth, if the message is received by alien life.

I understand that in the majority of cases these messages may be naïve, but I also hope that we will receive a creative and fresh look at the subject.

Zaitsev had also observed that it would be interesting to see young people's views on humanity and Earth. A senior astronomer from the Search for Extra Terrestrial Intelligence Institute in California, Seth Shostak, had observed that it is unimportant whether the aliens who might receive the messages would understand them.

If anybody's out there and they find that signal, they at least know that... there must be a planet with some pretty clever things on it.

The launching of the composed message as a digital time capsule took place on 9 October 2008, at 06:00 GMT. The message, containing all selected 501 text messages and images, was translated into a binary format and included in the digital time capsule. It was transmitted in a high-powered radio wave emitted from the RT-70 interstellar radar telescope of the National Space Agency of Ukraine, located in Yevpatoria.[9] It was aimed at Gliese 581c, a planet orbiting around the red dwarf star Gliese 581.

The message, traveling at light speed, passed the Moon in 1.3 seconds and passed Mars in 4 minutes. It had left the solar system within 20 hours.[2][13] Gliese 581c is 20 light years away from Earth, so the message will reach the planet in early 2029. A possible reply transmitted that year would reach Earth in 2049.

Retrieved from "https://en.everybodywiki.com/index.php?title=A_Message_from_Earth&oldid=848207"
Categories:
Hidden categories:
This page was last edited on 14 July 2020, at 03:32.
This page has been accessed 517 times.
Content is available under License CC BY-SA 3.0 unless otherwise noted.
Privacy policy
About EverybodyWiki Bios & Wiki
Disclaimers