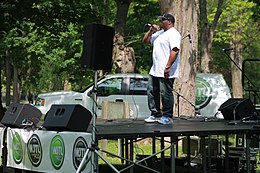 Young Able has released more than fifteen studio projects[3] including several singles, two albums, one EP, and five mix tapes.[4] A particular single Run Away from the Ep Walk by Faith was featured on multiple radio stations and made it's way to Kingdom Bangers[5] by the radio station A9Radio[6] located in Springfield Ohio.

Young Able is currently the CEO and organizational founder[7] of the independent record label Mercy Time Records[8][9]. The clothing line WeOnGod™ that provides donations and provisions to groups of people in Ghana and other countries[10][11] is an establishment that Young Able works with.

Field of Dreams was released in 2018 with a featured appearance from Loso. A remastered single S.W.A.G.[20] was released along with the single Fight Back[21] which features Th3 Saga and Illuminate.

Walk By Faith[22] is a solo project that Young Able released independently in August of 2019.

Retrieved from "https://en.everybodywiki.com/index.php?title=Young_Able_(Rapper)&oldid=795827"
Categories:
Hidden categories:
This page was last edited on 11 June 2020, at 08:00.
This page has been accessed 291 times.
Content is available under License CC BY-SA 3.0 unless otherwise noted.
Privacy policy
About EverybodyWiki Bios & Wiki
Disclaimers