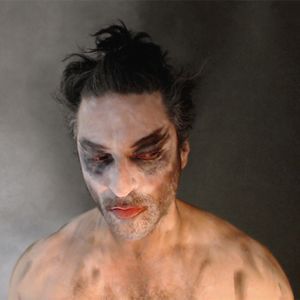 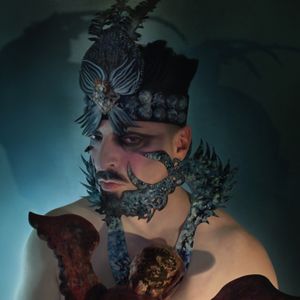 Ţepeş - "Explicitly named Ţepeş, it is very cool and sculptural in presentation, the head and upper torso carefully costumed and posed in a subdued yet glowing light, the eyes dark and the face expressionless as in many of Macri’s portraits. The title brings to mind a plethora of stories and folklore, movies and popular misconceptions. Who hasn’t heard of Vlad Tepeş, more commonly confused with Dracula?" - Kenneth Radu (Ghost in the Wings: Macri and Me) 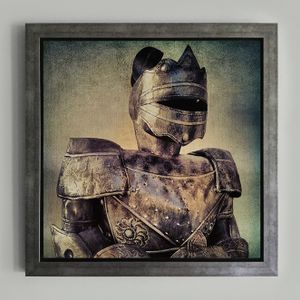 Adamo Macri is a Montreal (Canada) based multimedia artist. He uses different mediums in a systematic order to arrive at the end result. He compares this methodical approach to stages of procreation. His art has been described as the following:

Distinctive themes interweave in his work such as the forbidden, identity, contamination, the staging of nature and documenting sculpture. An important facet to understand is Macri's unique standpoint on sculpture. The idea alters the perception of the tangible object. Sculpture as a 3D Event, the practice of anti-sculpture. It is based upon perceiving sculpture as occurrence and not static presence. 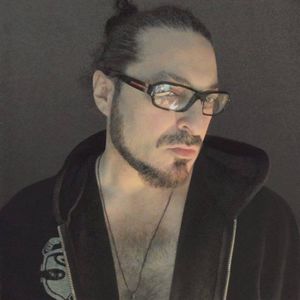 “An ephemeral three-dimensional occurrence, located at a specific point, which conjures up atemporal art.” This reality is achieved at the final stage in his methodical process, the photographic segment. “The camera places all objects in the past tense. In an instant, sculpture has vanished and a new reality is created”. Ultimately the final result must represent Macri’s most important aspect of his art, the resonating image.

"I love the concept of mystery because it’s reflective of life. It holds the essence of newness because it doesn’t ever fully reveal itself. There isn’t anything more intriguing, elusive and ambiguous than the idea of time. Change can be significantly drastic, the shift in transformations become unrecognizable. The outer surface reinvents itself as the internal remains constant. These measures play with the concept of time, commonly understood as a gradual process. I’m known for being a masked artist in a constant state of flux."

Born (June 8, 1964) in Montreal Quebec where his family lived in Saint-Michel, later moved to Saint-Leonard in a different borough in 1975. Macri is the youngest of four children and the only native Canadian born to Southern Italian emigrants, originally from Serra San Bruno, a small town with medieval origins in the mountainous region of Calabria.

"This brilliant, Montreal based artist works with photography, video, painting, drawing and sculpture, exploring themes connected to the human condition as identity, nature, contamination, simulating in his creative process the act of food making and putting together disparate elements that evoke mysterious and sensual, surreal suggestions."

"Destruction here, as in Macri’s vision evident throughout his artistic oeuvre, means re-creation and transformation, a kind of wisdom born of experience and knowledge derived from the recognition of the deep and necessary nature of change and energy. We remain vital and alert in sensuous immediacy and in the creative eroticism of life in the midst of decay."

"I was brought up in a suburb of mainly Italian immigrants where people held a common bond due to similar challenges and interests. Italians love to share and flaunt customary practices where the basis is usually food-related... The collective cultural identity and pride had a fixed mould to it. Any other form of deviation would be perceived as threatening or deformed. But as a teenager, I was becoming increasingly more aware of how homogenized and drone-like my district was and started gravitating toward the downtown area. My childhood experience constitutes much of who I am and forms the ground-basis of what I consider to be the inspiration for creating identity-based work."

"Most people don't like to be confronted with an actual fact-of-life because it's difficult to metabolize. A painting of a bowl of fruit is much easier. It's for the same reason why we don't like going to the doctor. The diagnosis and x-rays are too honest. This is what creates the perception that contemporary art is shocking or suspicious.” ~ Adamo Macri 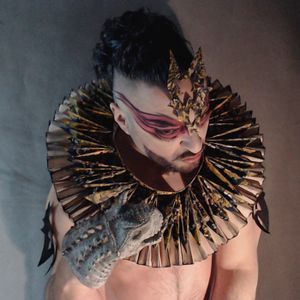 Icono Emoter - "The figure in Icono Emoter, for example, is richly detailed and adroitly constructed. Bizarre and familiar, the persona tilts towards his right hand encased in a dragon or triffid-like head. It seems to be a combination of the human and the vegetable, as well as the human and the mechanical, the result of a cross-fertilization of species, if you will, of the intermingling of organic and inorganic." - Kenneth Radu (Adamo Macri’s Triffid and I)

"I do preach the idea of individualism as in not adapting any kind of style or model other than that one of your own. I always found it strange in art history when studying about the different guilds and movements. It sounded too contrived and having to follow devised parameters to create art. I personally am not a team player in that manner. The art should be labeled by the artist's name only." ~ Adamo Macri

"Art exhibitions would be less censored if they were rated, G or NC-17, like movies. People in general see galleries and museums as family-appropriate excursions. Censorship is a provided system which caters to lazy parenting, which is publicly-funded and socially accepted." ~ Adamo Macri

"You can't measure dreams when you're a dreamer, because most often the caliber is unattainable." ~ Adamo Macri

"I regard texture similar to the function of taste buds in our mouths. But in a visual form. Texture does create a specific flavour which affects our senses." ~ Adamo Macri

Share
Retrieved from "https://en.everybodywiki.com/index.php?title=Adamo_Macri&oldid=2124894"
Hidden categories:
This page was last edited on 30 October 2021, at 19:40.
Content is available under License CC BY-SA 3.0 unless otherwise noted.
This page has been accessed 1,242 times.
Privacy policy
About EverybodyWiki Bios & Wiki
Disclaimers