Aerocancun was an airline founded in 1989 in Mexico.

This charter airline was based in Cancún, Quintana Roo, and operated charter flights to cities in the USA and Canada, including Miami, New Orleans, New York City, Oakland, Boston, Pittsburgh, Calgary and Edmonton. Aerocancun also operated flights to Europe but those were canceled in 1994 due to financial problems caused by an economic recession. During 1994/1995, the airline concentrated on the South American market. Aerocancun was owned by Mexican hoteliers and the Spanish airline Oasis, when the Oasis group collapsed at the end of 1996, Aerocancun filed for bankruptcy. 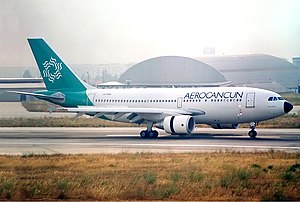