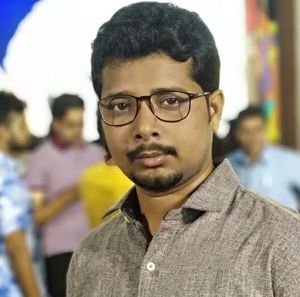 Ajitava Barat (Bengali: অজিতাভ বরাট , is Born 5th April 1990. He is an Indian filmmaker, Storywriter, screenwriter, Singer, Film Editor, Cinematographer. Ajitava is born in Raniganj into a Bengali family which is prominent in the field of arts and literature. Starting his career as a News Editor.

Barat's first film, Chaddabeshi (2018). Barat did the scripting, casting, scoring, and editing, and designed his own credit titles and publicity material.

Retrieved from "https://en.everybodywiki.com/index.php?title=Ajitava_Barat&oldid=1006955"
Hidden categories:
This page was last edited on 16 September 2020, at 06:07.
This page has been accessed 606 times.
Content is available under License CC BY-SA 3.0 unless otherwise noted.
Privacy policy
About EverybodyWiki Bios & Wiki
Disclaimers
Mobile view