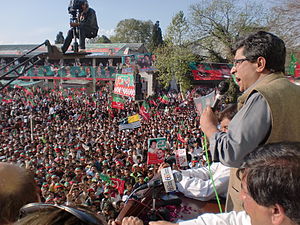 Khan served as the Executive Director of the Omar Asghar Khan Development Foundation for more than ten years.[7] The foundation works on political advocacy across the country, particularly in the Hazara region.

He is a founder of Tehreek Huqooq e Hazara[8] (Movement for Rights of Hazara)[9] and is also active in national politics.

He participated actively in a movement known as the Lawyers' Movement from its early protests against the Musharraf regime in March 2007 until the restoration of the judges in March 2009. In recognition of his contribution to the movement, Ali Asghar Khan was invited to be in a group of ten individuals who raised the national flag at the Chief Justice's residence on 22 March 2009.[10]

Like his father and brother, Khan works to promote human rights, especially in Hazara. In 2009, Khan initiated a national campaign called Aman Ittehad (United for Peace), which is working in all four provinces including FATA and Gilgit-Baltistan.[11]

Khan has been involved in politics since his teens, when he began taking part in democratic movements in the mid-1970s. He was first arrested at the age of 17 in Lahore for violating Section 144 and participating in a pro-democracy rally, something that was repeated a number of times during the Pakistan National Alliance's movement led by his father. He later went on to contest the general elections unsuccessfully from NA-17 Abbottabad.[12]

Khan was elected as President of the Hazara Region of the Pakistan Tehrik Insaf in 2013; previously, he was the party's Central Vice-President. He has also been a member of the Central Executive Committee of the party since 2011.[13] Khan was willing to contest in the general elections scheduled on 11 May 2013 as a party candidate from the NA-17 constituency, but he could not get consideration by the parliamentary board of Pakistan Tehrik Insaf. Khan is known for his progressive and development-oriented ideas, and has served on different committees formed to develop the party's policies.[14][15]

In an appeal before the Supreme Court of Pakistan in March 2015, Khan was allegedly blamed for cutting pine trees for his commercial plaza in Abbottabad. This appeal was filed against the Peshawar High Court's verdict, wherein a writ petition was dismissed on the basis of non-maintainability. The Supreme Court ordered the EPA to make an inspection,[16] and ordered a stop to the cutting of the pine trees.[17]

Share
Retrieved from "https://en.everybodywiki.com/index.php?title=Ali_Asghar_Khan_(politician)&oldid=853495"
Categories:
Hidden categories:
This page was last edited on 16 July 2020, at 00:28.
Content is available under License CC BY-SA 3.0 unless otherwise noted.
This page has been accessed 1,454 times.
Privacy policy
About EverybodyWiki Bios & Wiki
Disclaimers