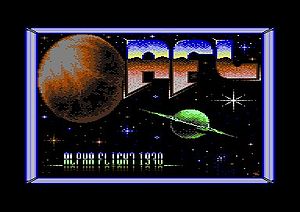 Alpha Flight 1970, also known as AFL or AFL 1970, is a German demoscene group that focuses on home computers.

The group was founded in 1985 and it focused on releasing programs to the Commodore 64. The name is based on Marvel Comics Alpha Flight comic book series. The affix 1970 refers to the birth year of the founders (Seven Up, Crime, The Damned, Frankie Double Team, The Gothicman and Danny).[1]

Alpha Flight is marked by different discmagazines, demos ja intros, which were released to the home computers, like Commodore 64, Amiga and later to the PC. Overview of all productions can be found here. Newest release is from August 2016.

Retrieved from "https://en.everybodywiki.com/index.php?title=Alpha_Flight_1970&oldid=1827506"
Categories:
Hidden categories:
This page was last edited on 14 February 2017, at 06:21.
This page has been accessed 42 times.
Content is available under License CC BY-SA 3.0 unless otherwise noted.
Privacy policy
About EverybodyWiki Bios & Wiki
Disclaimers