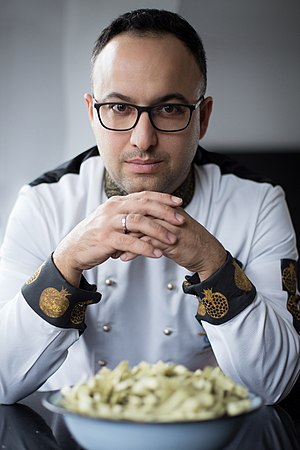 His passion was cooking and he wanted to gain knowledge about it. He undertook a job at one of the Iranian restaurant. During this time he worked with many leading oriental chefs, learnt and gained new important skills. After some time he became a chef at four – star hotel “Ashraf”, he also worked at many restaurants and hotels where he was responsible for cookery.

He expressed himself in kitchen but he couldn’t forget about graphic design. All the time he tried to connect cooking to graphic design and then he found “food styling”. He could develop two courses – cooking and graphic design. At the same time he was continuing studying at Jamie Oliver’s Culinary Academy and International Culinary School in France. At the end of 2008 he received an invitation to Poland, he was offered to be a chef and an organizer of waiter service. When he came to Poland he also organized shows of his graphic works. First of them was in 2009, it was very successful that’s why Amin decided to another one in 2010. His workshops and shows “Food Styling” are still very popular.

In Poland Amin cooperates with many companies, presently he is international ambassador of Goliard company. In the past he was ambassador of another companies such as Zepter, Delikato, Nlux and Uniflora. He also organized many culinary workshops for Good Style Academy.

During his career, Amin always remembers about other people. He is happy to help people who need it. Since 2009 he took part in more than 214 charity events. He cooporates with charity foundations like “Pzrzyszłość dla dzieci” (Future for Children) and Akogo. He cooks for Wielkiej Orkiestry Świątecznej Pomocy (The Great Orchestra of Christmas Charity) every year. What’s more, he is author of charity projects for children: Amin przyjaciel dzieci (Amin – children’s friend) and Szczęście od kuchni (Happiness from the kitchen).

After nine years in Poland, Amin achieved success. He cooked for many famous actors, musicians, politicians and ambassadors. He organizes many culinary workshops and shows for schools, sales networks and restaurants. He also helps to run many restaurants. Amin loves his job and puts his heart and soul into his work.

Share
Retrieved from "https://en.everybodywiki.com/index.php?title=Amin_Fakhari&oldid=855665"
Hidden categories:
This page was last edited on 16 July 2020, at 16:38.
Content is available under License CC BY-SA 3.0 unless otherwise noted.
This page has been accessed 931 times.
Privacy policy
About EverybodyWiki Bios & Wiki
Disclaimers