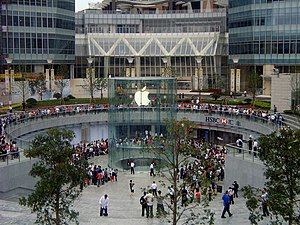 Apple aficionados wait in line around the Apple Store in anticipation of a new product. People who engage in such behavior are often stereotyped as "Apple fanboy."

"Apple fanboy" is a pejorative epithet used to describe a person who is loyal to the brand of Apple Inc., typically in an extreme manner. Apple fanboys are traditionally recognized as ones who regularly use products made by the technology firm Apple Inc. including the Mac, iPhone and iPad.

Although generally pejorative, the phrase has also been used in a positive manner. In October 2015, tributes were paid to prominent Apple blogger Gary Allen following his death. He was described as "well known in the Apple fanboy community" having visited more than 140 Apple Store openings worldwide.[1]

Technology writers have emphasised that simply owning and enjoying Apple products does not make someone an Apple fanboy, and believe a genuine enthusiast will be happy to give constructive criticism of a product where it is required. Engadget's Peter Rojas said "there's a difference between an Apple fanboy and someone who really cares about the products", adding that typical fanboy blogs are easily identifiable by their lack of any negative coverage.[2] In 2014, Walt Mossberg wrote "It's not a church. It's just an Apple store" and complained that Apple fanboys "pour down personal hate and derision" on users preferring competing products and platforms.[3]

In the mid-2000s, news outlets reported lengthy queues outside Apple stores before the launch of a new product, such as the iPhone 3G. A report in The Guardian described these queues as "the ritual of long lines of Apple fanboys"[4] while Computer Weekly described them as "the most tedious and embarrassing aspect of the consumer digital revolution".[5] In 2015, a leaked memo from Apple suggested the trend of lengthy queues was in decline.[6] During the wait for the launch of the iPhone 6 at Westfield London, the mobile carrier O2 booked the Chuckle Brothers to entertain the queue.[5]

Retrieved from "https://en.everybodywiki.com/index.php?title=Apple_fanboy&oldid=1854241"
Categories:
Hidden category:
This page was last edited on 19 February 2017, at 06:27.
This page has been accessed 71 times.
Content is available under License CC BY-SA 3.0 unless otherwise noted.
Privacy policy
About EverybodyWiki Bios & Wiki
Disclaimers