Fiaz took up boxing at the age of 8 years old.[2] He boxed out of Northside ABC in Manchester and won the national youth English title in the 60kg weight category.[3] He got his first Team England call in 2016 where he went on to represent the team multiple times. [4] 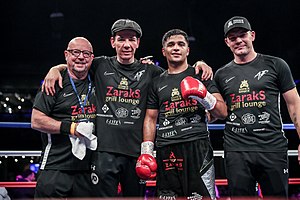 Fiaz and team in 2019 at Victoria Warehouse, Old Trafford

After deciding to leave Team England in 2019, Fiaz set his sights on becoming a professional boxer. He began his professional boxing career in 2019 at 19 years old, training under Jamie Moore. His new training camp meant he would be training alongside fighters of high caliber such as Carl Frampton, Rocky Fielding, Martin Murray and more. Aqib debuted in his home town at Oldham Leisure Centre against a seasoned professional in Ibrar Riyaz, claiming a dominant debut win. His second fight saw him take on a very dangerous opponent at the Victoria Warehouse in Old Trafford, the fight was contested at welterweight/light middleweight despite Aqib's natural fight weight being super featherweight. Aqib was drawn into a grueling fight by the heavier, older opponent, he managed to slow Fields down with some clean body shots and stuck to the game plan set out by Jamie Moore eventually defeating Fields 39-38.

This article "Aqib Fiaz" is from Wikipedia. The list of its authors can be seen in its historical and/or the page Edithistory:Aqib Fiaz. Articles copied from Draft Namespace on Wikipedia could be seen on the Draft Namespace of Wikipedia and not main one.

Retrieved from "https://en.everybodywiki.com/index.php?title=Aqib_Fiaz&oldid=858963"
Categories:
Hidden category:
This page was last edited on 17 July 2020, at 07:13.
This page has been accessed 1,828 times.
Content is available under License CC BY-SA 3.0 unless otherwise noted.
Privacy policy
About EverybodyWiki Bios & Wiki
Disclaimers