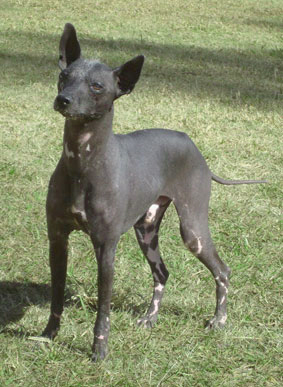 The Argentine Pila Dog (similar to the Bolivian Khala or Hairless Khala) is a hairless breed characteristically found in the northwestern provinces of Argentina. It is a companion dog, ranging in size from approximately 25 cm (10 inches) at the shoulder to 45 cm (18 inches).

The Argentine Pila Dog is a South American hairless breed very similar to the Chinese Crested Dog, Xoloitzcuintli and Peruvian Inca Orchid, from which last it is believed to be descended. Opinions vary on the origin of these pre-Columbian dogs (with the exception of the Chinese Crested Dog, apparently first bred from Peruvian Inca Orchids by Ida Garrett and Debra Woods in the first half of the 20th century in the U.S.),[1] but there is evidence of their existence in Central and South America as far back as 3,000 years ago. Differences between varieties – and there are well-founded reasons for referring to them as varieties, rather than breeds – probably stem from local isolation.

There appears to be no record of these dogs’ presence in Argentina prior to the early 15th century Inca colonization. The Inca empire spread north along the Andes from what is today Perú and Bolivia to Ecuador and southern Colombia, and south to the mountainous regions of central Chile and Argentina. It is supposed that the royal emissaries brought their ‘khalas’ (the Quechua word for naked or bald) as exchange offerings to strengthen ties with the distant colonies.

Following the Spanish conquest less than a century after Inca colonization, trade between Argentina and Perú continued mostly through the northwestern provinces of Salta and Jujuy; but the influx of dogs from the defeated civilization ceased. Spain was not interested in these hairless creatures except as a curiosity which was occasionally presented in Europe. Likewise, any pre-Hispanic trade there might have been between Central and South America ceased in favour of exporting valuables to Spain – and the dogs were not considered valuable. 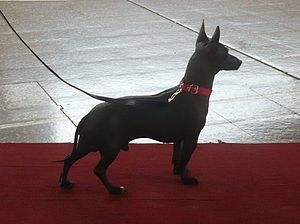 Thus, due to isolation, several varieties of hairless dogs evolved over the following centuries. These varieties include the Féderation Cynologique Internationale-approved Mexican and Peruvian breeds mentioned above, and several other variants throughout Latin America, including the Argentine Pila Dog. In this article we will describe the long-legged, "Chaqueño" Argentine Pila Dog; but in all these countries there are also descendants of a short-legged, barrel-bodied variety that probably evolved in the higher mountainous regions, with a body structure better adapted to cold and reduced atmospheric oxygen, which in Argentina is referred to as the "Andino".

During Spanish colonial times and well into the 20th Century, Pilas were held in high esteem by aboriginal, middle class and peasant families in the Argentine Northwest, who gave them this name using the colloquial Spanish term for ‘hairless’ or ‘naked’.[2][page needed] They were appreciated for their warm skin and served as bed warmers and therapeutic heating pads, especially for older people suffering from rheumatism. They were also valued as watchdogs, since they are very alert to any unusual movement or noise in their surroundings.

But in the second half of the 20th century, it became fashionable to possess fancy foreign breeds, and whatever status the Pila may have enjoyed in the past was lost to these pedigreed, expensive imported dogs. People ascending the social ladder began buying German Shepherds, Doberman Pinschers, Cocker Spaniels, Pekingese and others considered "classier". Added to this situation was the fact that most Pilas spent much of their time in the street, returning home only for food and warmth and an occasional pat on the head. Thus, the newcomers also soon becoming part of the street menagerie, interbreeding was inevitable. The consequence of this was that by the 1970s it was not unusual to see hairless Cocker Spaniels, Dachshunds, Pointers and others.

Currently, apparently pure Pilas are a rare sight, and even the mongrels are far less frequent than just 30 years ago. However, there is a small but enthusiastic budding movement for the rescue and restoration of this unique pre-Columbian breed. A first opportunity for the gathering of a large number of Pilas and their owners was created by the Municipality of Coronel Moldes (province of Salta, Argentina) at their "Primera Fiesta Nacional del Perro Pila Argentino" on 12 October 2004. This yearly meeting continued through 2007, but was held in the provincial capital, Salta, in November 2008. On that occasion, international judge Mrs. Elena Mentasti Spector left a record of her remarks on each of the 60 dogs presented.[3]

Another fiesta was organized by Salta’s Animal Health Department on 20 February 2011, in which 102 Pilas were judged and it became evident that new standards would have to be drawn up for the short-legged Andino variety, and also for a number of very uniform larger dogs with heavier bone structure and somewhat aggressive character, which has been tentatively designated as the "Pila guardián".

The Argentine Pila Dog, Chaqueño variety, comes in three sizes: Small, between 25 and 35 cm (10 to 14 inches) at the withers, Medium, from 35 to 45 cm (14 to 18 inches) and Large, over 45 cm tall. Structurally, true ‘Chaqueño’ Pilas are very similar to Miniature Pinschers, with shorter backs than the other hairless breeds, and higher tail set-on, so that in motion the tail curls forward, with the tip ideally just touching the back. Movement is less extended than in most breeds, but very elastic, with quick short steps, often–especially in the smaller dogs–in attractive hackney style which should be encouraged as distinctive to this breed. They are extremely agile, fast runners and great jumpers and climbers.

Pila heads are very slightly domed, lupoid and of medium length, with equal length of face to cranium. The stop is moderate, with greater definition between the top of the head and muzzle in smaller dogs. The eyes are medium or large, slightly almond-shaped, bright and expressive, and any colour from black to yellow. The muzzle is narrow, with close-fitting lips. The translucent, very mobile ears are set on rather high, with the outer edge level with the outer corner of the eye. At attention they are carried erect, with the outer borders of both ears parallel to each other. Pila ears are not as large as the Xoloitzcuintli or Peruvian Inca Orchid’s. 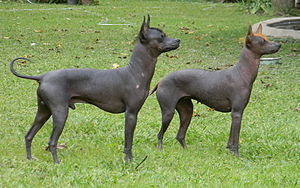 Hairlessness varies from one individual to another, some dogs having no hair at all except for whiskers, and some having prominent tufts on head, tail and feet, but never as profuse as the Chinese Crested’s. In some rare cases there is a barely perceptible fuzz covering most of the body, with occasional longer, erect hairs visible in contrasting light. None of the hair, however, resembles a true coat: it is always sparse; somewhat bristly on head, tail and feet when short, but fine and silky when longer. Pilas usually lack premolars, and may also have other teeth missing. But the incisors should be present and healthy with a close scissors bite, and ideally there should also be curved eye teeth, but these may be absent or conical. The skin is warm to the touch and, in well cared for dogs, smooth and flexible, comes in all colours and also in spotted or piebald. The Pila’s body temperature is the same as in other breeds, but feels warmer due to the lack of an insulating coat. Coat quality in coated dogs varies from short and bristly to long and silky. Some coated Pilas have longer coats similar to that of the Chinese Crested Powderpuff. However, as traditionally these coated dogs have not been kept for breeding purposes - their presence in a litter having mistakenly been considered proof of racial impurity - their history is not recorded. They usually have a full set of teeth and, like their hairless litter mates, come in all colours.[4]

Pilas are ideally suited to the limitations of modern life. They can be regarded as ‘indoor dogs’, since being relatively small, they adapt well to apartment life. They are easy to keep clean, do not harbour fleas, and having little or no hair are especially indicated as pets for people allergic to animals. They are easily trained, very loving with their human family and other pets and excellent, non-aggressive watchdogs.

In character they are happy, loving, playful, active pets and quick to learn house rules and all sorts of tricks. They are mistrustful of strangers and good watchdogs, but not aggressive towards humans or other household animals. Pilas will threaten and even fiercely chase intruders, both human and animal; but perhaps because they are conscious of their greater vulnerability they do not attack or fight. They enjoy exercise, but are also perfectly happy lying on a couch close to their favourite people. Until the 1970s, many Pilas were relatively voiceless: when they barked–which was seldom–they had a hoarse voice unlike that of any other breed.

Today, probably as a consequence of crossbreeding, their bark is like that of most other dogs, varying in pitch according to size.

Not all the puppies in a litter of Pilas will be hairless: as is the case in all but American Hairless Terriers, the genetic factor responsible for hairlessness in dogs is incompletely dominant and lethal, so that all live hairless offspring are heterozygous hairless/coated. Thus statistically, for every four ovules fertilized in a hairless-to-hairless breeding, one embryo will be homozygous (that is to say, ‘pure’ hairless) and will not develop into a viable puppy (usually reabsorbed in the uterus at embryonic stage); two embryos will be heterozygous hairless/coated, and become hairless puppies with varying hair expression at head, tail and feet, occasionally also on other parts of the body; and one will be homozygous coated/coated, and will look like a normally coated dog. Breeding coated to coated will never result in hairless puppies, but–again statistically–a coated to hairless breeding will produce one half of the litter of coated puppies, and the other half hairless.[5]

Pila skin requires the same care as human skin: frequent bathing – or rubbing down with a washcloth – and application of hypoallergenic body cream to avoid dryness. Sun exposure should be avoided, and sunscreen applied when outdoors in the daylight, with especially high SPF for lighter coloured dogs. Pilas do not harbour fleas, but are affected by mosquitoes, and they are attacked by ticks and should be examined daily to remove any of these parasites. They need to wear warm clothes in cold weather, and long sleeved T-shirts can replace sunscreen in warm weather.

Pilas are remarkably healthy, hardy dogs, as long as they are sheltered from the elements. They suffer from the cold, and should be clothed when outdoors in cold weather. Having been bred haphazardly and almost ‘in the wild’ for many generations, they have been naturally selected to be quite free from the genetic disorders found in most other breeds. They are also more resistant to such typical dog diseases as distemper, hepatitis and parvovirus, but should be vaccinated against these and other ailments to reinforce their immune system. Their one predominant health problem is skin cancer, especially in the lighter-coloured or piebald individuals; but this is easily avoidable with proper protection from the sun.

Well-cared for dogs live to a healthy old age; 18- and even 20-year-olds were not uncommon until mongrelization began, and such longevity is still occasionally seen today. Older dogs tend to lose all or most of their teeth, but apart from this they maintain excellent health. They do tend to become overweight, so diet must be watched.

Retrieved from "https://en.everybodywiki.com/index.php?title=Argentine_Pila_Dog&oldid=859169"
Categories:
Hidden categories:
This page was last edited on 17 July 2020, at 06:47.
This page has been accessed 450 times.
Content is available under License CC BY-SA 3.0 unless otherwise noted.
Privacy policy
About EverybodyWiki Bios & Wiki
Disclaimers
Dark mode