The Basler Turbo Conversions BT-67 is a remanufactured C-47 aircraft made by the Basler Turbo Conversions LLC company of Oshkosh, Wisconsin, USA. The C-47 remanufacturing into a Basler Turbo BT-67 includes a complete airframe overhaul, wing aerodynamic improvements, fuselage and wing structural strengthening, and the installation of new aircraft systems. All changes are covered by FAA STC certifications under extensive testing to FAR Part 25.[1] Dozens of BT-67s are currently in service in the world's most remote areas, including the Polar regions, deserts and jungles.

Basler Turbo Conversions LLC was formed in 1988 by Warren Basler. It is a sister company to Basler Flight Service, which was organized in 1957.[2] Before Basler Turbo Conversions went into C-47 conversions, it operated Basler Airlines, a regional airline using C-47 piston-powered aircraft flying local patrons to resorts in Canada on the airline version, and automotive parts between Midwest factories with the cargo version.[3] The Basler operation was a family business with Warren's wife Pat being active in all phases of the business.[4]

Production of the Basler Turbo BT-67 began in the new 75,000 square foot facility in January, 1990 at Wittman Regional Airport in Oshkosh, Wisconsin. The first Basler Turbo BT-67 flew in 1990 with a new Pratt & Whitney Canada PT6A-67R turboprop engines and Hartzell Hartzell HC-B5MA-3/M11276[5] five-blade metal propellers. Approval of the Supplemental Type Certificates (STCs) for the aircraft was issued by the FAA in February 1990.The base C-47 fuselage was lengthened by 40-inch plug forward of the wing.[6]

In 1996, Jack Goodale, a Grand Rapids, Michigan aviation entrepreneur bought and invested heavily into the company.[7] Basler founder and BT-67 designer Warren Basler died in a 1997 plane crash while filming the BT-67 from another plane during a marketing photo flight.[8] Thomas R. Weigt retired in 2017 as Basler Turbo Conversions CEO, after serving as CEO for more than 20 years, and Randall Myers became CEO. Randall Myers was formerly Director of production, engineering and maintenance for Basler.

On average, the company completes two to three BT-67's per year, depending on the configuration ordered.[9] As of January 2018, at least 63 Basler Turbo BT-67 aircraft have been produced by the Basler Turbo Conversions company.

Basler Turbo Conversions also supports the DC-3/C-47, with parts and an supplemental inspection program that can keep these airworthy well into the 100,000-hour range. The C-47 nicknamed "That’s All, Brother”, the leader of the formation that dropped thousands of American paratroopers into Normandy on D-Day, is again in flying condition after restoration by technicians at Basler Turbo Conversions.[10] BTC has everything needed to build a brand new DC-3 from scratch, and under its FAA parts manufacturing authority, it now makes more than 8,000 DC-3/BT-67 parts.[11]

The airframe is gutted of removable parts, steam cleaned and corrosion-protected; repaired and non-standard skeletal parts replaced.[12] All new systems that are installed includes the Powerplant, Avionics, Electrical Systems, Hydraulic Systems, Autopilot system, Fuel system, Air conditioning, De-icing, Fire protection, Control quadrant, and others that are needed to be replaced.[13]


The original version of the Basler Turbo BT-67 was envisioned as a modernized transport aircraft. The BT-67 became more successful with different Air Forces that used it as a cargo, transport and parachute drop, firebombing, and cloud seeding aircraft, given the proven versatility of its forerunner C-47.[17]


Two Air Forces uses the Basler Turbo BT-67 as a CAS gunship - Colombia[18] and El Salvador[19]. The Fuerza Aérea Colombiana or FAC has its many BT-67 gunships fitted with a FLIR ball on the aircraft nose chin area. [1]


Many Basler Turbo BT-67's has been acquired by geophysical survey companies, specially for Polar studies. They have installed sensors and electronics into the aircraft like radars, electromagnetic booms and "birds", and data links. The Alfred Wegener Institute of Germany has two of the most sensors-equipped BT-67's, the Polar 5 and Polar 6.[20] 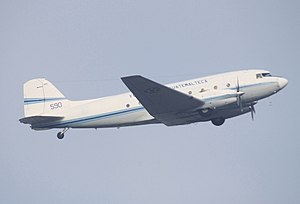 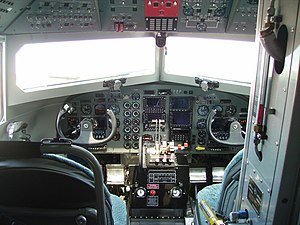 
It was also used by:


Potential New Users:
Mauritania’s air force may acquire a Basler Turbo BT-67 for the intelligence, surveillance and reconnaissance (ISR) role via Foreign Military Sales. In 2014, the Mauritanian Islamic Air Force (FAIM) upgraded its only BT-67 with an electro-optical (EO) turret and sensor equipment that can provide imagery directly to special mobile phones.[26]

Share
Retrieved from "https://en.everybodywiki.com/index.php?title=Basler_Turbo_BT-67&oldid=856446"
This page was last edited on 16 July 2020, at 20:30.
Content is available under License CC BY-SA 3.0 unless otherwise noted.
This page has been accessed 2,502 times.
Privacy policy
About EverybodyWiki Bios & Wiki
Disclaimers