Batman was a monster truck that competed on the USHRA circuit, where it is the 2007[1] and 2008 Monster Jam World Racing Champion.[2] The truck is officially licensed by DC Comics and has a replica of the Batmobile as the body.[1] It is driven by John Seasock[3] and debuted with Jason Childress driving in Charlotte, North Carolina in 2006. It has also competed in six Monster Jam World Finals, and won racing in both the 2007 and 2008 events. The body was designed at Downs Manufacturing in Lawton, Michigan by Jamie Downs and his team of designers, Terry Payne of Arlington,TX, and Doug Forbes of Three Rivers, MI. In 2013, Batman received a new look with half-sized fins and a new bat logo. In 2014, two time racing world champion John Seasock returned to the driver's seat of Batman.

In 2014, DC's contract expired, ending the use of all of the licensed trucks, including Batman.

In 2006, Jason Childress drove it. Then in 2007, John Seasock drove it and took home the World Finals Championship. The truck repeated the feat and retained the World Racing Championship in 2008. 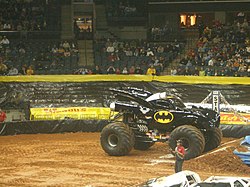 Share
Retrieved from "https://en.everybodywiki.com/index.php?title=Batman_(truck)&oldid=2123679"
Categories:
Hidden category:
This page was last edited on 29 October 2021, at 11:46.
Content is available under License CC BY-SA 3.0 unless otherwise noted.
This page has been accessed 316 times.
Privacy policy
About EverybodyWiki Bios & Wiki
Disclaimers