Baum Leaper Tone <ref>{{ is the very first Baum semi-hollowbody electric guitar model designed in 2016 by Baum Guitars <ref>{{ Denmark. The Leaper Tone is based on 4 prototypes - Leaper 212, 222, 232, 242 <ref>{{ designed by Morten Bau <ref>{{ in 2015. The shape and the headstock are passed directly from the previous prototypes. Unlike the 4 prototypes (scale 24.75"), the Leaper Tone is Semi-hollow, with new F-hole design (there later characterized by Baum Guitars Semi-hollow models) scale 25.5" and has a larger and more bold body.

It has a solid mahogany wood block runs through the center of its body. Leaper Tone is designed with P90 shaped pickups, such as Goldsound Jabmaster, Rewind 52, Bluesstack. It has uncharacteristically warm semi-hollow sound. Leaper Tone weighs between 3.5 - 3.7 kg. 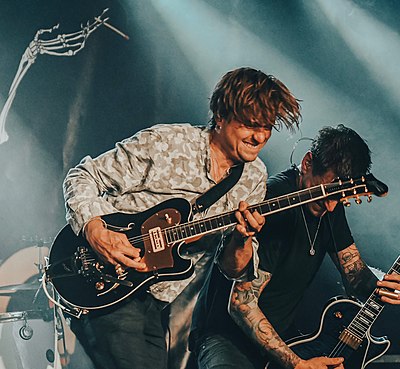 The First Baum Artist playing on the Leaper Tone was Neu Mannas front Singer and guitarist in The Matcthstick Skelletons.

Share
Retrieved from "https://en.everybodywiki.com/index.php?title=Baum_Leaper_Tone&oldid=2204857"
Category:
This page was last edited on 28 December 2021, at 20:57.
Content is available under License CC BY-SA 3.0 unless otherwise noted.
This page has been accessed 767 times.
Privacy policy
About EverybodyWiki Bios & Wiki
Disclaimers