In 2006 Brittani and Al patented[3] Bubbas's Boneless Ribs, a product and process for removing bones from an intact slab of ribs, making it possible for people to eat fully cooked deboned BBQ ribs with a knife and fork – this is not a reshaped patty. The co-inventors' patented product was featured on ABC’s show Shark Tank (December 2013)[4] where the father-daughter team partnered with branding expert and FUBU creator Daymond John. Brittani is the vice president of the company formed through the partnership with Daymond John.[5] 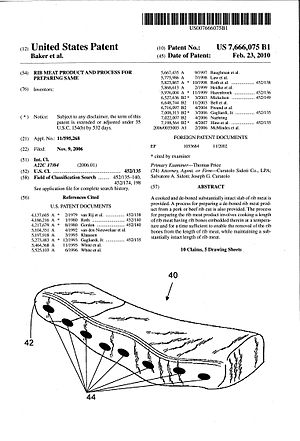 Baker often helps the homeless and less fortunate in the Cleveland area.[9] For her 29th birthday, she hosted and fed almost 100 homeless men at Bubba’s-Q Restaurant in Avon, Ohio.[10][11]

Baker serves as a board member for Lutheran Metropolitan Ministries Social Enterprise, which helps former homeless people learn the necessary skills to gain and maintain jobs in the culinary arts field.

Brittani has also been seen on QVC[12] with her father on the show In the Kitchen with David starring David Venable.[13]

Retrieved from "https://en.everybodywiki.com/index.php?title=Brittani_Bo_Baker&oldid=868161"
Category:
Hidden categories:
This page was last edited on 19 July 2020, at 03:55.
This page has been accessed 63 times.
Content is available under License CC BY-SA 3.0 unless otherwise noted.
Privacy policy
About EverybodyWiki Bios & Wiki
Disclaimers
Mobile view