Can We Take A Joke?

Can We Take A Joke?[edit]

Search Can We Take A Joke? on Amazon.

The creators describe the documentary as a "thought-provoking and wry exportation of outrage culture through the lens of stand-up comedy." Exploring how "outrage has become commonplace" and figures such as Gilbert Gottfried, Jim Norton and Adam Carolla detailing its impact on free speech and the exchange of ideas.

Some critics criticized it for being one sided and for taking a hard line on free speech, while others regarded it as sobering and comical.[2][3][4] [5] 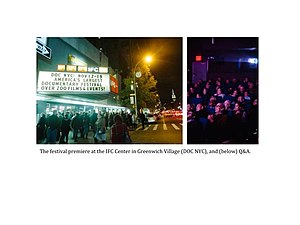 Distributed by Samuel Goldwyn Films. Distribution focused on digital, cable and Vimeo On Demand outlets, but included a small theatrical run in Los Angeles, New York City, and Arlington, Virginia. The theatrical release date was July 29, 2016 and the film's digital release (August 3, 2016) was selected to highlight the 50th anniversary of the death of Lenny Bruce, a central figure in the film.

The Lawrence student government voted against recognizing Students for Free Thought as an official university club.

The film was distributed by Samuel Goldwyn Films. It was made available on cable and satellite providers such as Verizon, Comcast, and DirecTV, as well as various streaming platforms.

Retrieved from "https://en.everybodywiki.com/index.php?title=Can_We_Take_A_Joke%3F&oldid=871412"
Category:
Hidden categories:
This page was last edited on 19 July 2020, at 19:25.
This page has been accessed 152 times.
Content is available under License CC BY-SA 3.0 unless otherwise noted.
Privacy policy
About EverybodyWiki Bios & Wiki
Disclaimers
Mobile view