Carlos Lyndon Mathews born on May 16, 1973, in Huntsville Alabama to Annie & Willie Mathews. His mother was a school teacher and his father was an Electrical Engineer. Both of his parents stressed education from an early age. As a third grader, while attending Rolling Hills Elementary School, Mathews parents were asked to attend a parent-teacher conference. During that conference, the teacher informed his parents that the school was going to move Carlos to special education classes because he was just not getting the material. During that time students that caused issues were just sent to special education classes to get them out of the regular classroom. Mathews parents refused to allow that to happen and withdrew him from the school system and enrolled him at a local Catholic private school, in Huntsville AL, Holy Family. His parent's decision to move him to a private school changed the course of his life and placed him on a path to be successful.

After two years attending the private school, it turns out that Carlos just needed to be challenged academically. By the time he reached the sixth grade, he had taught himself how to program a computer using the basic programming language used by the Commodore 64. Carlos decided to enter the science fair with a program that he had written to change the screen color based on input on how the person was feeling. It was a digital mood ring program. Unfortunately, the judges felt that this was too advanced for a student his age and overlooked his project.

By his eighth grade year, he started taking continuing education class provided by a company called Heathkit on AC & DC electronics. The electronic classes were equivalent to Electrical Engineering 101 classes on a college level. 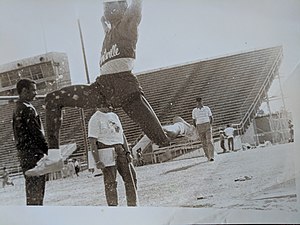 Mathews entered Huntsville High School as a freshman with basketball being his first love for sports. He competed his freshman year as a basketball player but did not receive much playing time. He was cut from the Huntsville High Basketball program at the end of the season. His basketball coach suggested that he try track and field. Mathews competed for Huntsville High School all four years of his high school career breaking several school records in the Outdoor Long Jump 23 ft 1 1/2" and the 55 meter dash 6.30 seconds.[1]. Mathews record in the Long Jump stood for 22 years until it was broke in 2012 by Nathan Vardaman . During his time at Huntsville High School Mathews contributed to the four consecutive city championships titles scoring points in the 100 meter, 200 meter, Long Jump, Triple Jump and 4x100 meters. Mathews was recruited by multiple universities but decided to attend Alabama A&M University.

Carlos Mathews, a native and resident of Huntsville, Ala., that excelled at AAMU in the sport of track and field from 1992-95 in the long jump, Triple Jump, 100 and 200 meters. He received All-SIAC honors three out of the four years he competed, and of only two long jumpers to qualify for the NCAA Division II National Championship. He is also the only male athlete to be part of four consecutive SIAC conference team titles. Mathews held the number two All-Time Performance for Alabama A&M University in the indoor long jump, number five All-Time Performance in the outdoor long jump and in the Top 10 Performances in the 100 meters. As of 2018, Mathews still holds one of the Top 10 Performances in the long jump and 100 meters. Mathews was inducted into the Alabama A&M University Hall of fame in 2013[2]

Mathews returned to the sport of Track & Field in the masters divisions at age 33 after not competing in the sport since his graduation from Alabama A&M in 1995. Over the years Mathews has been the Master US National Champion in the Outdoor M35 division in the Long Jump in 2012[3] and the Indoor national champion M40 division in the Triple Jump in 2014. He has also competed on the international level in the Masters World Championship placing 11th in the World in the Long Jump in 2011[4]

Mathews was an assistant coach for Sparkman High School Huntsville AL from 2016-2018. In 2017 Mathews teams won Alabama High School 7A state titles in the 4x 100 meters for both boys and girls. The girl's team set state meet record of 46.52.[7]

Mathews was the sprint and jumping coach for Bob Johnson High School in Madison AL from 2012-2015. During his time at Bob Jones High School, he helped coach his 2015 boys 4 x 100 relay team to an Alabama Highschool state title. Mathews also had several individual athletes set school records in the girl's Triple Jump and Javilon as well as the boys 100 and 200 meters.

Mathews was the Co-Head coach for Lee High School from 1999-2000. He was responsible for coaching all events for both the boys and girls teams. During his time as a coach at Lee High School, he was able to win a boys freshman Alabama High School State team title by taking seven boys performing at a high level in three events. Mathews coached Ronnie Elliot who is as of 2019 still the #2 All-Time sprinter in Alabama High School Association history in the 400m Dash.

Mathews was an assistant coach at Johnson High School in Huntsville AL from 1996-1998. During his time at JOJ he coach the 100,200,400 meters and the jumps for girls track and field. Johnson High school girl's team won an Alabama High School state title in 1996.[9]

Mathews was the assistant coach for University of Alabama Huntsville a Division II university from 2002-2005. He was responsible for the sprinters and jumpers. In 2004 UAH sent its first sprinter to the NCAA National Championship meet in the 200 meters. UAH sent its largest contingent to the NCAA Championships in 2005 as six individuals qualified for the field events one qualified in the sprint events and the 4 x100 team qualified to participate in the championship as well[10]. During Mathews time several school records were set:

Mathews was the assistant coach at Alabama A&M University in Normal Al from 1999-2002. He was responsible for coaching Women's Cross Country, multi-event athletes, the sprint events, and jumping events. Mathews helped transition Alabama A&M from the SIAC to the SWAC conference in Track & field. During his tenure as assistant coach Mathews was responsible for coaching the first SWAC Track & Field champion for Alabama A&M in the women's 60 meters LaShaunda Jones. His 2000 men's indoor track team was the best in the universities history. In 2000 more men's track records and top 10 performances were set than any other year in school history.

Mathews was the head coach of the Alabama Renegades out of Huntsville Al from 2007-2009. Women's football existed in the Huntsville area since the fall of 2000 when the Alabama Renegades first came into existence. The Renegades were one of the founding teams of the National Women's Football Association (NWFA). Mathews was the offensive coordinator for the Renegades the last season of the team's existence. The team's highlight for 2008 season was defeating the Pensacola Power a powerhouse on 4/26/2008 in Pensacola Florida. After falling behind in the game by twenty-eight points at halftime Mathews went on a passing attack with his QB Nacy Byrd. She passed for 366 yards and five touchdowns. Ms. Byrd also rushed for forty-six yards and two touch Downs. The team onside kicked after every touchdown recovering four and scoring on each consecutive drive. The final score was Alabama Renegades 60 Pensacola Power 58.[14]

Carlos Mathews, the former offensive coordinator for the Renegades, realized the potential for women's football in the Huntsville area and decided to explore ways to bring the game back for a 2009 season. Mathews researched several leagues but only found one with the stability needed to support women's football in the Huntsville Area. The Tigers officially joined the Independent Women's Football League (IWFL) on August 12, 2008, as a Tier II team. Mathews was the head coach for the Tennessee Valley Tigers from 2009 to 2011.

In the first season of play, the Tigers finished with a 5-3 record [15], losing twice to the Chattanooga Locomotion - another Tier II team - and once to the Atlanta Xplosion - a Tier I team in 2009. The Tigers also defeated then ranked number seven Clarksville Fox who in the 2008 season had competed for the Independent Women's Football League Tier championship. 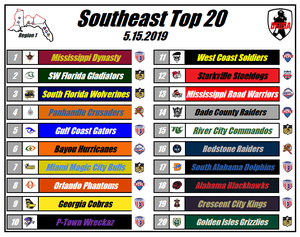 Mathews was the head coach for the Madison Generals from 2017 and 2018 season. During the 2017 and 2018 season, the Madison Generals struggle to keep a consistent roster. With having another semi-pro team in the same city and one in Decatur Alabama 30 miles away the number of players available became scarce. During these two seasons, players moved between teams that were winning and this left the Generals struggling with low numbers for players in each game resulting in two poor seasons. 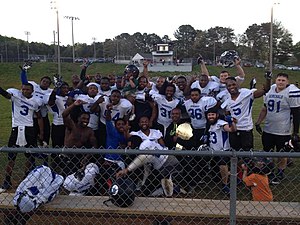 During the 2014 season, Mathews was the only coach on staff and coached offense, defense, and special teams. The team started off rocky losing its first four games of the season. In order to make the ASFL playoff the team need to win four straight games. The Redstone Generals won those games and made the playoffs. The Generals played three straight games to make to the title game. With each game played, the team that lost to the Generals joined forces to play against them in the next round. When the Generals played the Birmingham Blaze sixty men stood on the opposite sideline from four different teams compared the Generals who had only 26 players that day. Mathews coached his team to a league championship beating the undefeated Birmingham Blaze 36-7.[19] 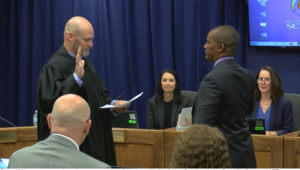 Carlos Mathews being sworn into the Huntsville Board of Education 2019

Retrieved from "https://en.everybodywiki.com/index.php?title=Carlos_Mathews&oldid=1150157"
This page was last edited on 1 December 2020, at 01:31.
This page has been accessed 3,139 times.
Content is available under License CC BY-SA 3.0 unless otherwise noted.
Privacy policy
About EverybodyWiki Bios & Wiki
Disclaimers
Mobile view