She is spearheading Rakshak Foundation, a reputed steadily growing Non-Governmental Organization in Kolkata. She has been contributing reforming measures, working closely with the Directorate of Prison in the Correctional Homes in West Bengal with the inmates of correctional homes, providing skill development, placement and rehabilitation for them.

She wants to establish proper backward and forward linkages, to allow women inmates of Correctional Homes of West Bengal to leverage their skills for better livelihood prospects. Not only does this initiative seeks to enhance livelihood opportunities, but also foster the revival of Jute- The Golden Fibre of Bengal and promote it as a fashion statement. 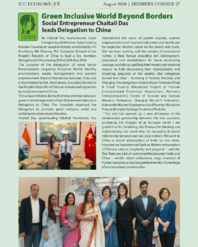 ICC Economique covered Ms. Chaitali Das's initiative of Green Inclusive World Beyond Border. Ms Das was nominated by H.E MA Zhanwu, Consulate General of The People's Republic of China, to lead a 5 member delegation to China during 20th to 26th May, 2018. 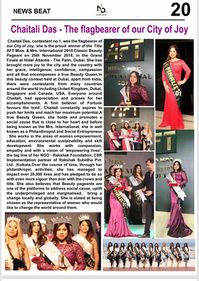 She targets to empower lives behind bars through skill development, rehabilitation, inculcating

courage, confidence, uplifting the moral value to reintegrate them back into society, including social awareness and acceptance. 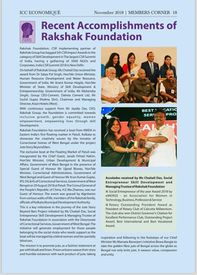 Rakshak Foundation, implementing partner of Rakshak Group bagged 5th CSR Impact Awards in the category of Skill Development in The Largest CSR Summit of India, having a gathering of 3000 NGOs and corporates, India CSR Summit 2018 in New Delhi.

Her foundation in association with the Directorate of Correctional Services, Government of West Bengal, initiated the project ‘Jute Story Beyond Bars’ aiming to provide and facilitate skill development to the women inmates of Correctional Homes in West Bengal, that engages them with creativity and scaling up the skill which will help them to get back to the mainstream with livelihood opportunity after their release. Under this project inmates of correctional homes are trained to make various artefacts and utility items of international quality and standard – using Jute which is bio-degradable and environment friendly. This initiative is meant to harness creativity, engaging the artisans and empowering lives while conserving the environment.

Her foundation is creating small and micro women entrepreneurs. An exemplary step of transformation and empowerment is rehabilitating a 32 year old young woman Lovely Adhikari who is a former Inmate from Women Correctional Home and who is now given the responsibility to supervise the Jute Products crafting and manufacturing unit at Dum Dum Correctional Home, named “Jute Story Beyond Bars”.

“Jute Story Beyond Bars is just one year old and it gives the prison inmates a sense of freedom. It helps to channelize their energy in a positive direction” - also it is a step to give them a new identity.

Her vision is to expand the programme of imparting training to other correctional homes in India with a team of trainers.

·        The aim of such training and work programme would be to equip inmates with better skills and work habits for their rehabilitation.

·        Promoting Green revolution beyond Bars, harnessing Jute, the Golden Fiber of West Bengal all over India and in the world.

·        To scale up Jute, at par, with Khadi and Linen, to promote using “Jute Story Beyond Bars” products as a fashion statement spreading more awareness across India and the Globe.

Besides the above creative endeavours, she has also successfully set up and run courses on Spoken English and Personality Development amongst the inmates so that upon release these inmates have recourse to employment. She has also accomplished setting up of a Leather Training unit and an Apparel making unit collaborating with Designer Farheen Raheman along with her team members.

Under Srishti Rakshak (Art, Culture & Creativity), Ms. Das, through her Foundation, has started imparting painting training to the mother inmates along with their children to express their thoughts and invoke their innate creativity with an idea that once a prisoner is released, they can make a livelihood through the skills they've acquired if they choose to. She has also promoted Stone Carving for the jail inmates in Kolkata and Purulia, West Bengal.

Her foundation provides regular Homeopathy treatment assistance to Inmates in correctional homes. She also renders Art and Painting Training for the mother inmates along with their children to express their thoughts and invoke their innate creativity.

Media coverage of the launch of Jute Story Beyond Bars

Yet another of her many initiatives is to run two Child development Centres with Kolkata Police- NABADISHA Child Development Centre at Tollygunge and Ekbalpore, Kolkata. The purpose is to make education and health care accessible and school education an enjoyable aspect for street and working children, who are either absolutely illiterate or are drop-outs.

Her Foundation provides education to these children up to a certain level and when they become competent enough, they would be mainstreamed and sent to Government Schools.

Considering the fact that there is urgent need in the society to make our young generation strong, both mentally and physically, to cope with situations like child abuse especially where a girl is subjected to assaults, in addition to studies, these children are encouraged to take up sports, vocational training in handicrafts, theatre, art, drama etc which will help them to build their mentality making them mentally strong. These children are trained in making paper bags from newspaper- another project of Rakshak using reusable things. The initiative ‘earning while learning will help these children to learn self-respect and earn to survive instead of begging. When these children will become adult they will help their juniors to grow in life. In association with Rotary Club of Calcutta MILLENNIUM and supported by Consulate General of China in Kolkata, Ms. Das  has established ‘New Horizon Art & Cultural Centre’ for Slum Children and ‘New Horizon Computer Training Centre’ for youth and women from low-income households.

Inauguration of Jute Story Beyond Bars Boat at The Patuli Floating Market Kolkata.

Rakshak Foundation is a reputed steadily growing Non-Governmental Organization. It is based in Kolkata, West Bengal. This organization is headed by Social Entrepreneur Ms. Chaitali Das funded by The Rakshak Group. The Aim of the Foundation is to empower lives by imparting skill development and by fostering a greener environment, with a primary focus on women empowerment, in its modest attempt to create an impartial and just society.

Rakshak Foundation has the privilege of having meaningfully impacted over 15,000 lives till March 2018 and a target to reach out to 100,000 underprivileged individuals from disadvantaged and depressed backgrounds through our various projects by 2025.

It is registered under MSME, Section 80G and 12A Income Tax Exemption, NITI Aayog and NGO Darpan. It has obtained the Import Export Code. It is empanelled with the National Jute Board (NJB) and Paschim Banga Society for Skill Development (PBSSD). CRISIL gradation and FCRA registration is underway.

Media Coverage of Aitijhya- a first of its kind painting exhibition my the artists in confinement to commemorate World Heritage Week.
Share