By the Light of a Hexagonal Lantern, woodblock print by Torii Kiyonobu I, early 1700s.

Clothed female, naked male (CFNM) is a genre of nudity based on the real or imagined interaction of one or more nude men and one or more clothed women.[verification needed]

In classical antiquity, the portrayal of nude male form in art (including the exposure of genitals) was considered to be more acceptable than that of the naked female form. By the Renaissance, this view had reversed.[1] 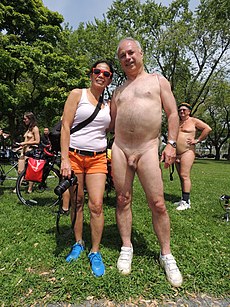 Feminist authors Christina Hoff Sommers and Naomi Wolf have written that women's sexual liberation has led many women to a role reversal wherein they view men as sex objects in a manner similar to what they criticize in men's treatment of women.[2][3][4]

Share
Retrieved from "https://en.everybodywiki.com/index.php?title=Clothed_female,_naked_male&oldid=2106755"
Category:
Hidden categories:
This page was last edited on 13 October 2021, at 12:24.
Content is available under License CC BY-SA 3.0 unless otherwise noted.
This page has been accessed 114 times.
Privacy policy
About EverybodyWiki Bios & Wiki
Disclaimers