Club Nautique LLC is a network of accredited US SAILING Certification facilities located in Northern California and Mexico with its headquarters in Alameda, California..[1] While the name is obscure in the United States, in the rest of the world, Club Nautique is synonymous with "Boating Club".

First opened in August of 1980, Club Nautique was founded by avid Bay Area sailor and yacht salesman Don Durant[2] in order to provide his customers with a more reliable managed charter experience. A family owned and operated business[3], Club Nautique has since grown to be the largest charter Club in Northern California by size of fleet, charter locations, course offerings, and total membership.

Offering courses from beginner to advanced, the school has been honored with US Sailing's Captain Joe Prosser Award for Excellence in Sailing Instruction[4]

Club Nautique is particularly well known for its advanced sailing courses. It is US Sailing's number one Coastal Passage Maker and Offshore Passage Maker certifier in the nation. Some years, over 75% of the national total of OPM and CPM graduates are certified through Club Nautique's programs[5] 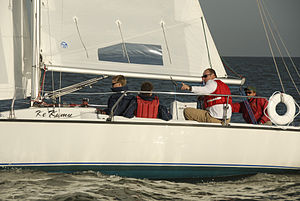 Club Nautique has a long history of hiring Veterans and Reservists. In April of 2018, the Club was honored to receive a Patriot Award[7] from the ESGR for it's long-standing commitment to supporting the military.

Club Nautique also hosts an annual sailing competition, The American Armed Forces Cup (AAFC)[8], between the 5 armed forces. Typically the event is held on or near Fleet Week.

Each Year, Club Nautique's largest charitable giving activity is coordinated with Operation Dignity[9]. Realizing that the AAFC attracted thousands of local residents, in 2016 Club Nautique and Alameda Point Partners began hosting a community fair as a viewing party for the regatta[10]. In its first year, the community fair attracted over 1,500 viewers and raised over $5,000 for the charity.

Club Nautique is the exclusive dealer for vessels entering its charter fleet[11]. This allows Club Nautique to be the factory warranty provider for all of the Beneteau, Jeanneau and Mainship vessels in the fleet.

In the Spring of 2018, Cruising Specialists (owned by Club Nautique's parent company) became the Jeanneau dealer for Northern California. This has allowed Club Nautique to begin offering Jeanneau Outboards for entry into the fleet.[12]

All Club Nautique Members are provided with a US Sailing International Proficiency Certificate upon completing either Bareboat Cruising or Inshore Power Cruising courses. As a result, Club Members are particularly active cruisers.

The Club supports this activity by:

Retrieved from "https://en.everybodywiki.com/index.php?title=Club_Nautique&oldid=875541"
This page was last edited on 20 July 2020, at 17:44.
This page has been accessed 357 times.
Content is available under License CC BY-SA 3.0 unless otherwise noted.
Privacy policy
About EverybodyWiki Bios & Wiki
Disclaimers