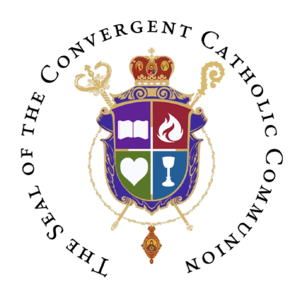 Seal of the Convergent Catholic Communion 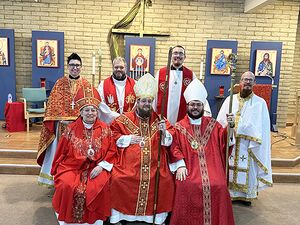 The Bishops and General Councils of the CCC.

The Convergent Catholic Communion is a Communion of Catholic Christians within the Convergent and Independent Sacramental Movements. The CCC envisions a church that is balance of the evangelical (Gospel-focused), charismatic (Spirit-filled), and Sacramental (Liturgy-based) traditions[1].

The government of the Convergent Catholic Communion (formerly the Convergent Christian Communion) is be vested in its Para-Church Ministries and Worship Communities through their lay delegates and duly qualified clergy, gathered in General Assembly. The Pastoral Authority for the Communion is held by the Bishops Council while the Administrative Powers are exercised by the General Council[2].

The Members and Ministries of the Communion are organized based on charism into non geographic entities known as Connexions. These Connexions are based on Rite (Eastern and Western) & Expression (Low, Broad and High Church); and are led by an Ordinary/Eparch.

Since its founding, the C.C.C. has self-identified as egalitarian and fully inclusive of L.G.B.T. Affirming .

The Convergent Catholic Communion was birthed out of a vision laid out by Rev. Drew Haywood-Larsen and Rev. Kenny von Folmar. These two ministers sought to establish a safe haven for affirming clergy and ministries that identified as Evangelical, Sacramental, and Charismatic. In early 2014, Rev. Drew and Rev. Kenny began laying the framework that would provide the Convergent Catholic movement with an inclusive network that could be a spiritual covering for clergy and ministries; in addition to equipping them with the resources, education and training needed to plant, lead and pastor a convergent catholic community. On June 15th, 2014, The CCC was officially launched (then known as the Anthem Network). The first General Assembly was held in August 2014, officers were elected and a Constitution was ratified.

After 2 years of dialogue and debate, in 2018 the C.C.C. completed its initial transformation by calling for the consecration of its first two bishops[4]. Today, all bishops in the C.C.C are consecrated within Apostolic Succession. 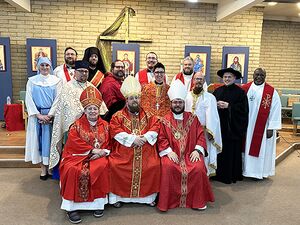 Members of the Convergent Christian Communion at General Assembly in 2020

On All Saints Day 2020 (November 1st) the Convergent Catholic Communion, published the first of its kind "Convergent Prayer Book". This prayer book is published through Lulu with the cost matching the printing cost (no profit to the C.C.C.). On December 6th 2020, another founder, Tom Weller passed away after a short battle with COVID[5].

In July 2021, an Eastern Rite Connexion was formed to answer the call for a place for Eastern Rite Catholics within the Convergent Catholic Communion.

In November 2022, the overwhelming majority of the voting delegates meeting at General Assembly voted in favor of adopting the Convergent Catholic Communion as the official name of the CCC.

Share
Retrieved from "https://en.everybodywiki.com/index.php?title=Convergent_Christian_Communion&oldid=3077907"
This page was last edited on 17 November 2022, at 22:15.
Content is available under License CC BY-SA 3.0 unless otherwise noted.
This page has been accessed 1,110 times.
Privacy policy
About EverybodyWiki Bios & Wiki
Disclaimers