Dagger is an American music zine, founded in 1987 by Tim Hinely. It contains interviews, editorials, album reviews and live reviews, and may be the last music zine of that era still in print.

Dagger is a zine that contains artist interviews, editorials, yearly best of lists, album reviews and live reviews, record store reviews, band ramblings, journals and tour diaries, book reviews, zine reviews, comics, desert island discs, short fiction, as well as original art and photography related to punk and independent music and culture. It is arranged on 8​1⁄2" x 11" paper, in black and white newspaper format with a glossy color cover, in photo-copied, self-published, hand-stapled print, and since 2007, Dagger is available online.[1][2] An editor from a 2004 edition of Punk Planet notes that "despite its nice newsprint format, though, the layout is very bland."[1] Dagger has maintained coverage of the underground music scene, described by another Punk Planet editor as "indie pop eat[ing] itself in an implosion of rare factoids and obscure interviews;" though many featured artists have gone on to achieve popularity.[3] Contemporaries note that Dagger comes "with a steady diet of humor, insight and honesty," and that Hinely shows a "deep knowledge of punk/indie music."[4][1] The writing is distinguished among its peers by its "congenial lover's tone and inexplicable earnestess."[5] Several prominent artist interviews in the zine include American Music Club, the Chills, Mudhoney, Neutral Milk Hotel, Will Oldham, the Pastels, and children's author Graham Salisbury, along with music journalists Michael Azerrad and Steven Blush.[6][7] Dagger is cataloged by Bowling Green State University's Zine Archive at the Jerome Library Music Library and Bill Schurk Sound Archives. 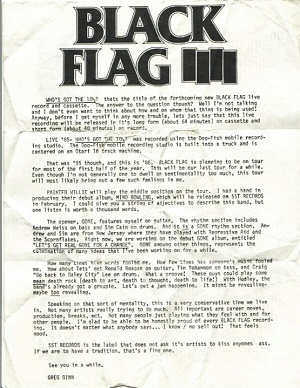 In an interview with QRD, founder Tim Hinely recalls that as a child, together he and his sister would make magazines, saying "I think that was the beginning (though they were not about music.)" In his early twenties, Hinely started reading music zines, and recalls upon seeing a friend in South Jersey publish his first zine entitled Big Fuckin' Deal, that it had "spurred me into action."[8] From the backwoods of a New Jersey ranch house, Hinely began independently publishing Dagger in March 1987, and it contained interviews and music reviews. For many years, Hinely frequented the nightclub City Gardens in nearby Trenton, New Jersey, where he would attend concerts, meet artists, and hawk issues of Dagger.[9] Maximumrocknroll recognized it as one of the best and most consistent fanzines of the area in a 1988 edition.[10] The cost per issue was fifty cents. It also began to feature illustrations by the punk artist Jeff Gaither. Beginning in 1989, issues of Dagger could be purchased through the mail at a cost of one dollar and sixty-five cents; also that year Hinely began releasing a series of "Dagger Compilation" cassette tapes.[11] On Hinely's reviews of records, zines and obscure cassettes in Dagger issue No. 10, Lowlife says his "cocky, colloquial, humorous style of reviewing is fairly typical, but he is far from the worst practitioner of the form."[12] A critic of a 1989 issue of Dagger, No. 11 writes "the green cover doesn't make me horny and the content doesn't get me excited either," however they add "I'm not saying it's bad[;] Tim puts time and thought into it."[13] By 1990, the cost of issues of Dagger sold via mail was two dollars, and the zine had grown to feature "wall to wall" music reviews, zine reviews, concert reviews, records and tapes; though Dagger noticeably was yet to review releases made on compact discs. In a 1990 zine review by Option, the editor calls Dagger "low-fi, not attractively designed [and] stapled together," but adds "and really, the writing's fairly good and informative."[14] That year a reviewer from Factsheet Five says "Tim writes well and slams things that need slamming while keeping an open mind about the rest and knowing his stuff when it comes to punk and other strange new music" about issue No. 12, and Mike Gunderloy notes of issue No. 13 "more interesting with my bias, were Tim's chatty zine reviews, managing to put a fresh light on the same old stuff;" adding that Hinely also "prints some strange fictional stuff too."[15][16] Many of the issues of Dagger were around thirty pages long in the 1990s. The early years saw Hinely interviewing Antiseen, hitching a ride in the Surgery tour van, and talking with "A-listers of the highest order," like Tesco and Mark Eitzel.[5]

Dagger expanded to include multiple review sections, with each by a different person focusing on a different style or genre.[1] It gained distinction in the early 1990s among its counterparts, noted by the Philadelphia Daily News in 1992 as being "the most established local fanzine."[17] The 1994 edition of Alternative Press Review describes Dagger as a "punk zine of the angry, yet sensitive, young man variety," noting that issue No. 16 features "some more than amusing zine, show and record reviews."[18] Dagger was recognized for its concert coverage, and as one reviewer of issue No. 17 exclaims, it is "a pretty neat zine that has way long reviews, including show reviews! Show reviews, goddammit!"[19] Around 1993, Hinely relocated to Santa Rosa, California, as announced in the Spring '93 Dagger issue "Gone To California." Gutless lauds Hinely's prompt publication schedule for issues No. 20 and 21, saying "it amazes me that Tim has put out twenty, count 'em 20, issues. That's a great accomplishment. This is a full-sized, indie-rock based zine. The layout is simple, in a way I would like to emulate. Also: a whole lotta reviews and ads."[20] By the early 2000s, Hinely had foregone traditional zine-making techniques, and adopted building the zine using desktop publishing, and in 2002, he moved to Portland, Oregon. Though it was no longer a local magazine, Punk Planet notes in a 2004 piece that the zine "suffers when taken out of Portland[;] it seems to require vast knowledge of the densely populated indie music scene," however, they add that "luckily Tim has that knowledge and he likes to share."[3] The price per copy when ordered through mail varied between two and three dollars and fifty cents in the early 2000s, but was still free of charge from Hinely if handed to in person. Dagger grew to nearly one hundred pages long, and it contained over two hundred album reviews per issue.[21] A 2006 piece in Punk Planet calls issue No. 37 "ambitious [and] abundant with interviews and reviews. There's a standout piece on good riffs in rock music," however, addressing its localized scope, says that "Dagger doesn't cover much territory."[22] Starting in 2007, Hinely and other Dagger contributors began publishing music reviews, interviews and editorials online, in addition to the continued print issues. Hinely relocated to Denver, Colorado in 2012.

Commenting on the zines' longevity in a 2008 issue of Arthur, music critic Byron Coley and musician Thurston Moore say the "redoubtable Dagger [continues] with everything in order," noting that Hinely "still puts together a great pile of reviews and features that rock rock rock."[23] Blurt columnist Fred Mills writes about the decline of zines in a 2011 piece "Reading Assignment: New Dagger 'zine," asking "how hard is it to push the "publish" button on a website, compared to the work that's involved with laying out an array of 8½" x 10" pages, arranging ads, shipping the thing off to a printer and then going about the distribution and mailing of a 'zine? Tim Hinely, straight out [of] Portland, has been publishing the mighty Dagger zine for ages now."[24] Musician and former zinester Ian Henderson says in a 2012 interview "the only 'zines I read now are Dagger – possibly the longest running US print 'zine [and] The Big Takeover."[25] Marc Masters of Pitchfork notes Dagger "is still going strong" and is "one of the best" in a 2013 editorial piece on the zines of the 1980s and 1990s, and it may be the last music fanzine of that era still printed, as longtime rival zine Maximumrocknroll announced its plans to cease print publications in 2019.[26][27]

In addition to writing, editing and publishing Dagger, Tim Hinely is also a contributor to the music and media magazines Blurt, Magnet, and the Portland Mercury, and his reviews have appeared in The Desert Sun.[6] Blurt has published a seven-part series written by Hinely entitled "For the love of zines!"[28] He also has contributed to the zine Go Metric! and has written pieces on the history of zines and his favorite zines from the 1980s, as well as a piece on the history of the club-venue City Gardens, and following the group Devo on a tri-state club tour in 1988. His work for Dagger appears in the DIY guide to zine-making, Make a Zine: When Words and Graphics Collide by Bill Brent and Joe Biel.[29] He also is a contributor to the books The Overrated Book, Lost in the Grooves, Everybody Loves Our Town: an Oral History of Grunge and Chunklet's Indie Cred Test: Everything You Need to Know About Knowing Everything You Need to Know. Hinely has consistently listed Chickfactor, Beer Frame, BB Gun and The Big Takeover among his favorite zines.[4] A contemporary says of Hinely, "he's the congenial guy next door who looks like he should be coaching a Cinnamonson, NJ Little League team or barbecuing on the 4th of July while retelling Jackie Martling jokes. Instead, Tim channels his Protestant work ethnic, informed as it is by a fevered music hound's title, into lionizing underground rock no-counts working the crease."[5]

He played in the band BLOODSHACK in the 1980s and 1990s, which featured electric guitar and programmed drum machines.[11] In 2000, Hinely founded an independent record label in San Francisco, California called Sky Blue Records. The label's first release is the twenty-three track compilation album Popular World, which showcases songs by St. Christopher, Ladybug Transistor, the Mendoza Line and the Pacific Ocean, and is called "a great comp CD [from the] indie mogul Tim of the great Dagger zine."[30] The label's last release was Taylor Davis' album Brighter in 2011.

Punk Planet columnist Claire Sewell suggests "if you like interviews, this is your zine."[31] Noted for its lengthy interviews, Hinley and other contributors have conducted hundreds with musicians, label owners, authors and music journalists since the zine's inception. Additionally, bands have published their tour diaries in Dagger, including Sportsguitar, Saturnine, Sugar Plant and Tar.

Retrieved from "https://en.everybodywiki.com/index.php?title=Dagger_(zine)&oldid=478535"
Category:
Hidden categories:
This page was last edited on 13 June 2019, at 21:36.
This page has been accessed 373 times.
Content is available under License CC BY-SA 3.0 unless otherwise noted.
Privacy policy
About EverybodyWiki Bios & Wiki
Disclaimers
Mobile view