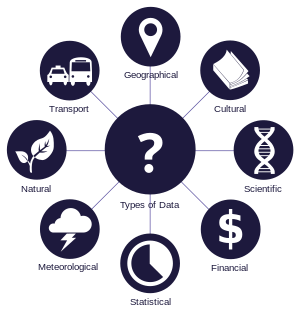 Data (/ˈdeɪtə/ DAY-tə, /ˈdætə/ DAT-ə, /ˈdɑːtə/ DAH-tə;[1] treated as singular, plural, or as a mass noun) is any sequence of one or more symbols given meaning by specific act(s) of interpretation.

Data (or datum – a single unit of data) requires interpretation to become information. To translate data to information, there must be several known factors considered. The factors involved are determined by the creator of the data and the desired information. The term metadata is used to reference the data about the data. Metadata may be implied, specified or given. Data relating to physical events or processes will also have a temporal component. In almost all cases this temporal component is implied. This is the case when a device such as a temperature logger receives data from a temperature sensor. When the temperature is received it is assumed that the data has a temporal references of "now". So the device records the date, time and temperature together. When the data logger communicates temperatures, it must also report the date and time (metadata) for each temperature.

Digital data is data that is represented using the binary number system of ones (1) and zeros (0), as opposed to analog representation. In modern (post 1960) computer systems, all data is digital. Data within a computer, in most cases, moves as parallel data. Data moving to or from a computer, in most cases, moves as serial data. See Parallel communication and Serial communication. Data sourced from an analog device, such as a temperature sensor, must pass through an "analog to digital converter" or "ADC" (see Analog-to-digital converter) to convert the analog data to digital data.

Data representing quantities, characters, or symbols on which operations are performed by a computer are stored and recorded on magnetic, optical, or mechanical recording media, and transmitted in the form of digital electrical signals.[2]

A program is a set of data that consists of a series of coded software instructions to control the operation of a computer or other machine.[3] Physical computer memory elements consist of an address and a byte/word of data storage. Digital data are often stored in relational databases, like tables or SQL databases, and can generally be represented as abstract key/value pairs.

In an alternate usage, binary files (which are not human-readable) are sometimes called "data" as distinguished from human-readable "text".[4] The total amount of digital data in 2007 was estimated to be 281 billion gigabytes (= 281 exabytes).[5][6] Digital data comes in these three states: data at rest, data in transit and data in use.

At its most essential, a single datum is a value stored at a specific location.

Fundamentally, computers follow a sequence of instructions they are given in the form of data. A set of instructions to perform a given task (or tasks) is called a "program". In the nominal case, the program, as executed by the computer, will consist of binary machine code. The elements of storage manipulated by the program, but not actually executed by the CPU, are also data. Program instructions, and the data that the program manipulates, are both stored in exactly the same way. Therefore, it is possible for computer programs to operate on other computer programs, by manipulating their programmatic data.

The line between program and data can become blurry. An interpreter, for example, is a program. The input data to an interpreter is itself a program, just not one expressed in native machine language. In many cases, the interpreted program will be a human-readable text file, which is manipulated with a text editor program (more normally associated with plain text data). Metaprogramming similarly involves programs manipulating other programs as data. Programs like compilers, linkers, debuggers, program updaters, virus scanners and such use other programs as their data.

To store data bytes in a file, they have to be serialized in a "file format". Typically, programs are stored in special file types, different from those used for other data. Executable files contain programs; all other files are also data files. However, executable files may also contain "in-line" data which is built into the program. In particular, some executable files have a data segment, which nominally contains constants and initial values (both data).

Keys in data provide the context for values. Regardless of the structure of data, there is always a key component present. Data keys in data and data-structures are essential for giving meaning to data values. Without a key that is directly or indirectly associated with a value, or collection of values in a structure, the values become meaningless and cease to be data. That is to say, there has to be at least a key component linked to a value component in order for it to be considered data. Data can be represented in computers in multiple ways, as per the following examples:

Retrieved from "https://en.everybodywiki.com/index.php?title=Data_(computing)&oldid=211511"
Category:
This page was last edited on 8 November 2018, at 03:11.
This page has been accessed 253 times.
Content is available under License CC BY-SA 3.0 unless otherwise noted.
Privacy policy
About EverybodyWiki Bios & Wiki
Disclaimers