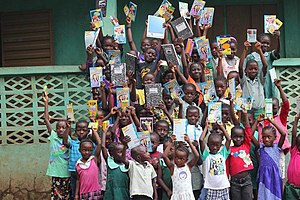 Children in Africa with donated notebooks and pencils 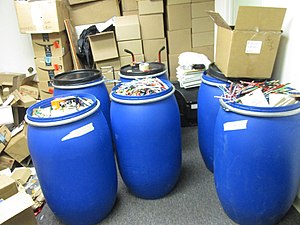 Prepared drums with school supplies in the Tennessee store

Develop Africa is a 501(c)(3) registered non-profit organization based in Johnson City, Tennessee, United States founded in November 2005. The purpose is to help community projects in African developing countries[1] and its focus is on education and resource development.[2]

In Freetown Develop Africa provides the computer training and the computer lab.[3] In June 2013 Bartlett, Pringle & Wolf company via Develop Africa donated to children over 1500 golden pens.[4] The school notebooks, books and other learning material is distributed to the schools in Murray Town, Juba, Freetown, etc.[5]

In 2008 started The Pencil Project initiated by James Ryan Orr, who cooperating with the Develop Africa distributes pencils to African pupils [7][8][9] A book The Pencil Project: How to Change The World was published in November 2017.[10][11]

In 2015 Develop Africa with the Door of Hope charity built a Dream Home for the Ebola virus orphans from crises in 2014-15.[12][13] It is located in Freetown, Sierra Leone and was visited by BBC Media Action.[14]

Managing director Sylvester Renner for his efforts in the promotion of education he received African Achievers International Award in 2012.[15] The same year he received the Humanitarian Leadership Award from National Organization of Sierra Leoneans in North America (NOSLINA).[16]

Other articles of the topic Charity : Sylvester Renner, MBA

Share
Retrieved from "https://en.everybodywiki.com/index.php?title=Develop_Africa_charity&oldid=881745"
Categories:
Hidden categories:
This page was last edited on 22 July 2020, at 08:05.
Content is available under License CC BY-SA 3.0 unless otherwise noted.
This page has been accessed 643 times.
Privacy policy
About EverybodyWiki Bios & Wiki
Disclaimers