Dominic Schmidt (born: (1997-03-29)March 29, 1997) known on YouTube, and Instagram for making freakishly insane content. Schmidt was born in the Cincinnati, Ohio area and even claims in Instagram livestreams to often get recognized in person in public - Dominic Schmidt has been watched by millions although it's not the type of fame the average person would desire. He has had multiple of his social media accounts such as YouTube, terminated for violating the terms of service due to the nature of his content such as drinking toilet water and humping his teddy bear. Not only has his main channel been reinstated , but he has a second channel as well now which is currently his backup.

Success and Rise of Fame[edit] 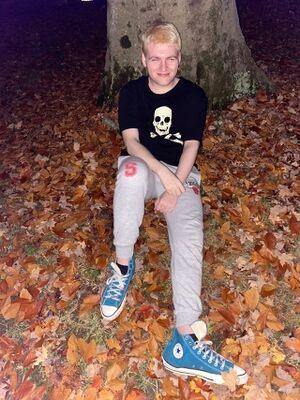 Dominic Schmidt lying by a tree

Schmidt has been getting the attention he's wanted recently, getting recognized by some very big YouTube names online consisting of Leafyishere , Scrubby, andmany others. All of these videos went viral, and Schmidt even made a response series video to Scrubby, which blew up. He was even invited to join Mike Busey, in Florida in his Sausage Castle mansion. The experience was noted from Schmidt as being one of the most notable experiences hes' ever had.

Retrieved from "https://en.everybodywiki.com/index.php?title=Dominicschmidt&oldid=1748330"
Category:
Hidden categories:
This page was last edited on 30 May 2021, at 11:07.
This page has been accessed 883 times.
Content is available under License CC BY-SA 3.0 unless otherwise noted.
Privacy policy
About EverybodyWiki Bios & Wiki
Disclaimers