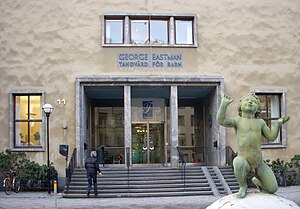 It was built by donations from the American inventor George Eastman and opened in 1937. The institute provided free dental care for children in Stockholm. For some years the Eastman Institute was unique, but later social reforms made dental care free for all children in Sweden.

Eastmaninstitutet is used as location in the 1976 action film The Man on the Roof.

Retrieved from "https://en.everybodywiki.com/index.php?title=Eastmaninstitutet&oldid=1066229"
Categories:
Hidden category:
This page was last edited on 21 October 2020, at 01:21.
This page has been accessed 40 times.
Content is available under License CC BY-SA 3.0 unless otherwise noted.
Privacy policy
About EverybodyWiki Bios & Wiki
Disclaimers
Mobile view