I understand why it was moved to draft. It only had one reference. Now it has 6.UserAkrasia25

The task of the embassy[edit]

The main task of the Embassy of Ukraine in Belgrade is to represent the interests of Ukraine, promote the development of political, economic, cultural, scientific and other ties, as well as protect the rights and interests of citizens and legal entities of Ukraine located in Serbia.[2]

The embassy promotes the development of interstate relations between Ukraine and Serbia at all levels, in order to ensure the harmonious development of mutual relations, as well as cooperation on issues of mutual interest. The embassy also performs consular functions.[2]

In July 2020, the embassy responded to protests in Serbia on Ukrainian political matters and asking it not to interfere in Ukrainian internal affairs.[3]

In Dec 2020, the embassy inquired into a seized shipment of Bronze Age, Byzantine period, Middle Ages, and artefacts of ancient Slavs and Celts crossing from Ukraine into Serbia.[4]

Diplomatic relations at the embassy level between Ukraine and the Federal Republic of Yugoslavia (FRY) were established on 15 April 1994. In 1995, the first Embassy of Ukraine in the Federal Republic of Yugoslavia was inaugurated. The embassy was located at Belgrade, Josyp Slovenskeho Street. Subsequently, the Embassy moved to new premises at Belgrade, Oslobodjenje Boulevard 87. On 1 December 2009, the Government of Ukraine purchased a new building for the Embassy of Ukraine in Belgrade at Paje Adamova Street 4.[2] 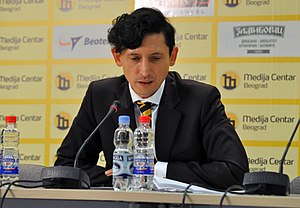 In 2017, Aleksandrovych returned to Serbia to continue in his post despite Serbian calls to expel him. Aleksandrovych stated that Russia uses Serbia to harm Europe by destabilizing the region.[6] [7]

Aleksandrovich was criticized for doubting Serbia's neutrality with Ukraine's troubles with Russian since Serbia does not prevent Serbian citizens in the eastern border battle with Russia.[6]

Aleksandrovich said although Serbia passed a law in 2014 against its citizens fighting in foreign wars there are still 300 Serban mercenaries in Donbas.[6]

Cooperation between regions of Ukraine and Serbia

Ukraine actively develops its contacts with Serbia on the regional level. The legal basis for such cooperation is bilateral documents between different regions of both countries. Nowadays there are such bilateral agreements, as:

·       Protocol on cooperation in the fields of culture, trade and economy, sciense and technical issues between Kyiv regional administration of Ukraine and Autonomous region of Vojvodina;

·       Agreement between Kropivnitsky regional administration and Nis region on trade and economic, scientific and cultural cooperation;

·       Agreement between Ternopil regional administration and the Government of the Autonomous region of Vojvodina on cultural, economic, scientific cooperation.[8]

Trade and economic cooperation between Ukraine and Serbia

According to the data of the State Statistics Service of Ukraine bilateral trade in goods and services between Ukraine and the Republic of Serbia totaled 245 million USD.

According to the State Statistics Service of Ukraine, as of December 31, 2019, the volume of Serbian investments in the Ukrainian economy amounted to 33.2 million dollars. US, which is 0.6 million less than the previous year.

According to the Ministry of Finance of the Rebublic of Serbia, about one thousand business entities cooperate with Ukraine.

According to the Agency for Registration of Business Entities, in 2020, 152 business entities were registered in Serbia, the majority owners of which are citizens of Ukraine or Ukrainian legal entities, most of which are engaged in retail trade and trade in auto parts, processing industry.[10]

Others articles of the Topics Politics AND Ukraine : Embassy of Ukraine in Rome, Russo-Ukrainian War

Retrieved from "https://en.everybodywiki.com/index.php?title=Embassy_of_Ukraine,_Belgrade&oldid=1963688"
Hidden categories:
This page was last edited on 15 August 2021, at 11:14.
This page has been accessed 33 times.
Content is available under License CC BY-SA 3.0 unless otherwise noted.
Privacy policy
About EverybodyWiki Bios & Wiki
Disclaimers