Eric Lefkofsky (born September 2, 1969) is an American entrepreneur and philanthropist who is most noted for co-founding e-commerce giant Groupon, as well as his personal leadership of cutting-edge oncology data pioneer Tempus. Lefkofsky is also a major philanthropist around the country and, particularly, throughout the Chicago area. 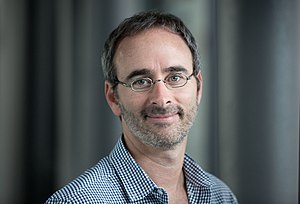 Lefkofsky grew up in Southfield, Michigan, a suburb of Detroit. His father, Bill Lefkofsky, worked as a structural engineer and his mother, Sandy Lefkofsky, was a local school teacher. He attended Southfield-Lathrup High School and graduated in 1987. He was accepted to the University of Michigan, where he graduated with honors in 1991. He received his law degree from the University of Michigan Law School in 1993.

Shortly after graduating from law school, Lefkofsky decided that he would rather pursue a career as an entrepreneur than become a practicing lawyer. He and a college friend founded and acquired a string of businesses throughout the 1990s, which eventually culminated in two of their companies, InnerWorkings and Echo Global Logistics, going public in the mid-2000s.

In 2007, Lefkofsky co-founded a web-based business called ThePoint.com. This company would eventually change its name to Groupon. Under Lefkofsky’s leadership, the firm grew at a breakneck pace. By 2011, Groupon was worth at least $6 billion. Lefkofsky and his family netted nearly $400 million when Groupon partially bought him out in that same year.

In 2013, one of Lefkofsky’s close family members was diagnosed with cancer. This brought Lefkofsky into contact with the country’s oncology industry. He was shocked to discover that, in many cases, oncologists had objectively worse data support than many on-the-road truck drivers.

Over the next few years, Lefkofsky began researching the state of medical data in the United States – particularly as it relates to electronic medical records and the analytics and interfaces that allow physicians, particularly those working in cancer-related specialties – to make the best real-time decisions regarding patient care.

He found that there was massive room for improvement. In 2016, Lefkofsky co-founded Tempus, a company dedicated to helping oncologists access and optimally use the vast troves of data that are potentially at their disposal.

In an interview with Forbes, Lefkofsky explains that there is currently so much data available to oncologists that the problem is not getting more data but being able to optimally use it. As someone who was deeply familiar with the advanced statistical methods collectively referred to as “artificial intelligence,” Lefkofsky immediately recognized that the problem of using the oceanic pool of data currently available to oncologists is precisely the class of problem that artificial intelligence is best at solving.

This was the genesis behind Tempus. Today, Tempus helps doctors make far better use of their data. An example that Lefkofsky often gives regarding the types of problems that Tempus helps doctors solve is the case of the cancer treatment Herceptin. Like almost all chemotherapies, Herceptin is administered to patients with certain disease characteristics, specifically breast cancer that tests positive for the HER2+ growth factor.

However, the variance in outcomes from this drug is enormous. Lefkofsky explains that some patients respond remarkably well to the drug, while others end up having to resort to second-line treatments. In some cases, the drug proves dangerously toxic or even fatal. In fact, across the entire gamut of cancer treatments, a significant portion of patients simply turn out to be incapable of tolerating the treatments.

Lefkofsky explains that this wide variation in patient outcomes is due to inadequate modeling, where medical professionals must rely on treatment modalities that only weakly correlate with patient outcomes. In other words, the way oncologists determine which course of treatment best suits patients is inadequate because the decision-making process in selecting treatments does not adequately take into account or best use all of the available information.

Lefkofksy says that in the case of Herceptin, it may be possible to eliminate most or all of the worst patient outcomes by simply taking more factors into account and using an artificial-intelligence-derived model to boost predictive power, helping oncologists know ahead of time who is unlikely to respond well to the drug and which patients are at an increased risk of experiencing high-grade toxicity.

One of the most promising areas in which Tempus is currently developing its analytic engine is the area of genomic data. With rapidly increasing and far more accurate genomic data available, Tempus will put in oncologists hands analytic capabilities that will rival the power of genome-wide association studies. This information will be available on demand to help oncologists make the best diagnoses and treatment decisions in real time.

Ultimately, this will allow a level of customization in the treatment of cancer that promises to someday reduce the disease to an annoying yet manageable malady for most patients, rather than a potential death sentence.

In addition to its research and development of some of the most cutting-edge cancer analytics in the world, Tempus also markets a number of more mundane but highly valuable products to medical professionals. One of these is its OCR system for structuring doctors’ notes into a usable format for inclusion in electronic medical records and other applications. Previously, this function was often outsourced at considerable cost to hospitals. Tempus’ solution promises to radically increase efficiency of making doctors’ notes EMR-usable while saving huge sums for hospitals in the process.

Philanthropy and Net Worth

Lefkofksy is currently estimated to be worth more than $2.5 billion. He and his wife founded the Lefkofsky Foundation, a charitable trust that primarily helps children and medical causes.

In 2013, Lefkofksy and his wife joined the Giving Pledge, promising to eventually donate more than half of their net worth to charitable causes across the world.

Share
Retrieved from "https://en.everybodywiki.com/index.php?title=Eric_Lefkofsky&oldid=512617"
This page was last edited on 13 August 2019, at 18:28.
Content is available under License CC BY-SA 3.0 unless otherwise noted.
This page has been accessed 1,426 times.
Privacy policy
About EverybodyWiki Bios & Wiki
Disclaimers