Fallen Angels [3]is a live action Manga film based on the Real@Manga standards.

The film had an incredible start never seen in an independent film. Ranked in its first week under 10K, at 9000 in IMDb moviemeter[4] . Winning 4 awards in the Arte Non-Stop Film Festival 2016 [5].

The preview of the film, a 10 minute screener, was showcased at the Sitges International Film Festival, having a standing ovation and positive reviews. In the audience there were directors such as Quentin Tarantino and Dario Argento, who congratulated the director for his unique visual achievement by taking live actors to the screen in a Manga style.

Another preview of the film took place at Lucerne International Film Festival, invited by Guido Baechler [6] [7], the Director of the Festival.

The legendary producer Andrew Vajna [8]also got involved with the film.

The official trailer of the film can be seen here

Scarlett Da Vinci is a revolutionary teenager, and a well known hacker, who strives through life to overcome poverty and the unexpected mysterious suicide of her mother, due to the foreclosure of her house. These events ignite the spark that ends up triggering the unthinkable. As a means of vengeance for what the establishment did to her dilapidated life, she engages in the operation Snow Cake, an intricately plan to hack the servers of the NSA and the White House, seeking to expose their naughty secrets. But the information found in her wake, forces her to a rapid exile in Europe, where the plane which was taking her, is suddenly shot down and her whereabouts, unknown. 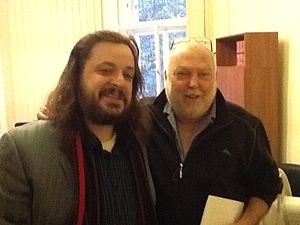 As TELAM reports [9], The importance of the film lies in being the first and only film in history to win an award for best Manga Film, done with real actors.

During the AFM American Film Market 2016, the movie became a sensation between Asian distributors who are now becoming part of the release.

Overall, the film received positive reviews among distributors in general, particularly in the Asian Region and is ready to participate in the Honk Kong Film Market in March 2017 [17].

Fallen Angels will be commercially released first in the United States, in November 2017, and in the rest of the world in December. It is already confirmed that the film will be in competition in over 10 film festival during the summer circuit of 2017.