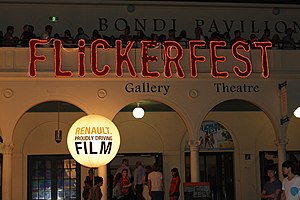 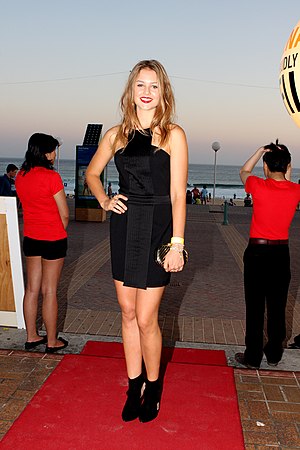 Isabelle Cornish at the festival's opening night with Bondi Beach in the background.

The festival originated as a small, local festival at Balmain High School in 1991. It has premiered an increasingly broader range of international short films since its establishment.[2]

In 2003, Flickerfest was recognised by the Academy of Motion Picture Arts and Science to qualify for Best Animation and Best Short Film categories of the Academy Awards.[2]

In 2010, the British Academy of Film and Television Arts (BAFTA) recognised that if a film from the UK won a category at Flickerfest, the film then became eligible for a BAFTA nomination.[2]

Since 1991, Flickerfest has grown substantially. By 2018, the festival had grown to include 22 programmes shown, over 2 500 entries and 100 international shorts being showcased at the event.[3]

Bronwyn Kidd is the festival's director as of 2018. Kidd curates several hundred short films for the annual event, and the following national tour. She also contributes to the curation of international film festivals such as The London Australian Film Festival at The Barbican.[4]

Flickerfest's production and tour manager is Shane Rennie, who has been involved in the production of Flickerfest since 2000. Rennie is involved in web population, technical presentation, festival production, and festival photography, and is also a member of the Flickerfest selection committee.[5] Since 2005, he has organised the Flickerfest National Tour, working directly with venues that the tour will be held at to establish dates, media and online strategies, programme suggestions, and logistics.[6][7]

Leigh Russell is the Industry Liaison and primary coordinator of the 2018 Flickerfest jury and FlickerUp, a nationwide competition for primary and high school students.[8]

For films to be eligible to be shown in Flickerfest they must meet the entry requirements are:

Throughout the duration of the festival, short films are showcased that are of a competitive and non-competitive nature. These films are presented in eight different categories.

The "Best of Australian" category showcases the films short listed for the Academy accredited award "Best Australian Short Film". In 2018, there were seven separate screenings of the competition, ranging between seven and nine individual films every screening.[10]

The "Best of International" category shows international films in competition for the awards; Best Short Animation and Best Short Drama which are both Academy accredited awards. In 2018, the programme was separated into five parts, premiering seven films in each screening.[11]

The "FlickerKids" section of the festival is non-competitive. It showcases films that are "delightfully entertaining" and that will "appeal to the kid in everyone”.[12] In 2018, 11 films were shown in this category with only one screening.[12]

The "Best of Documentary" category showcases the films short listed for the Academy accredited award "Best Documentary Short Film". In 2018, there were two separate screening of the competition, with seven films being shown in each individual screening.[13]

The "Best of EU Shorts" is a non-competitive section of the festival. It showcases shorts that are "moving and entertaining" that are drawn from within the European Union.[14] In 2018, the programme was showcased in two sections with seven films shown in each part. [14]

The "Short Laughs Comedy" category of the festival is non-competitive. It showcases international "hilarious off-kilter" shorts.[15] In 2018, the section was shown in two sections with ten films shown in each section.[15]

The "FlickerUp" category showcases the finalists of the national competition for primary and secondary school aged students or individuals under the age of 18. In 2018, the section consisted of 22 short films.[16]

The "Rainbow Shorts" section of the festival. It is a non-competitive section and "celebrates"[17] international LGBTQI stories. The section premiered in 2018 with seven films in the programme.[17]

The Flickerfest national tour was established in 1995. The tour consists of the central competitive programmes of the festival which include Best of Australian Shorts, Best of International Shorts and Shorts Laugh Comedy. The tour travels to rural, regional and metropolitan areas, to showcase the shorts.[18]

The Flickerfest Tour has been publicised in regional and rural local newspapers. The Clarence Daily Examiner writes that the tour brings a "new arsenal of hilarious entertaining and thought-provoking micro cinema from across the country".[19] The Newcastle Herald talks of local filmmaker's work being "brought to the big screen."[20] The Illawarra Mercury writes on the local Kiama short film Buoy being selected to be shown in the Flickerfest Tour.[21] The Wauchope Gazette reports the tour visiting Port Macquarie, the article primarily focuses upon the animation Lost Property Office and short film Miro, an Aboriginal Western film, describing the short to be "delightfully quirky and creative".[22]

Canon Award for Best Direction in an Australian Short Film

Avid Award for Best Editing in an Australian Short Film

Flickerfest Award for Best Performance in an Australian Short Film

There are numerous other awards categories. Some other notable short films honoured or shown include:

The festival hosts an opening night which has been attended by Australian celebrities.

Opening night photos from the 2013 event:

The Sydney Morning Herald conducted an interview with festival director Bronwyn Kidd in relation to gender parity. Kidd states "When I started out, female directors were a rare breed. Now hopefully we're encouraging a whole new generation to come into the industry."[49]

Broadsheet, Sydney gave a synopsis of the festivals proceedings, stating "Australia's a great country of storytellers. The list of films on show [at the festival] has been narrowed down from over 2500 to 110.”[50] The article also highlights the benefits of short film writing “[Short films are] so contemporary. A feature can take seven years from start to finish, [for] a short you can grab a camera and in two weeks you make a statement.”[50]

The Brag writes that "Flickerfest is unique in that the judging process doesn’t take the entrant’s budget into consideration – films are instead judged against the strength of the storytelling and the authenticity of the director’s voice." [51]