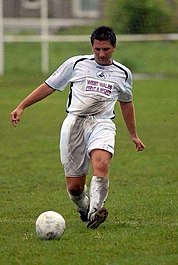 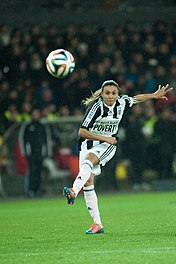 It has been estimated that there are 250 million association football players in the world,[1] and many play the other forms of football.

Jean-Pierre Papin has described football as a "universal language".[2] Footballers across the world and at almost any level may regularly attract large crowds of spectators, and players are the focal points of widespread social phenomena such as association football culture.

Footballers generally begin as amateurs and the best players progress to become professional players. Normally they start at a youth team (any local team) and from there, based on skill and talent, scouts offer contracts. Once signed, some learn to play better football and a few advance to the senior or professional teams.

However, only a fraction of men's professional football players are paid at this level. Wages may be much more moderate in other divisions and leagues, and a significant number[clarification needed] of players are semi-professional. For example, the average annual salary for footballers in Major League Soccer (which started in 2009) for the 2013 season was $148,693, with significant variations depending on player position (goalkeepers for example earned $85,296, whereas forwards earned $251,805[6]). 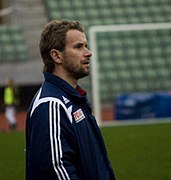 Arild Stavrum is a retired football player who post-retirement has worked as a football manager and novelist.

Pia Sundhage is a retired football player who post-retirement has worked as the football manager for the United States and Sweden national teams.

A minority of retired footballers continue working full-time within football, for instance as football managers. A 1979 study reported that former first-team ballplayers were over-represented as top ranking executives in their companies and had greater income mobility than second teamers and reserves.[8] However, some experience chronic health issues, see below.

Research shows that association football players that take less than 200ms after the referee blows their whistle for a penalty kick are significantly more likely to miss scoring than those that take over a second.[9][10] 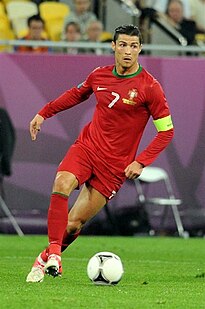 Cristiano Ronaldo, an example of a "lean and muscular" men's association football player

]]
Faith Ikidi, an example of a "lean and muscular" women's association football player

An Irish 2002 study of association and Gaelic football players characterised players as "lean and muscular with a reasonably high level of capacity in all areas of physical performance".[11] The opposite is the case for American football, where obesity could be the cause of grave health problems.[12]

A 2000 study documented injuries sustained by Czech [association] football players at all levels:[13]

[14]Patellar tendinitis (knee pain) is considered an overused injury that also happens to other athletes of virtually every sport. It is a common problem that football players develop and can usually be treated by a quadriceps strengthening program. Jumping activities place particularly high strains on the tendon and with repetitive jumping, tearing and injury of the tendon can occur. The chronic injury and healing response results in inflammation and localized pain.[15]

Although levels of depression and pain in retired football players are on par with the societal average,[16] some players suffer from post-retirement chronic injuries. Head injuries are a particular concern.

The average life expectancy or lifespan of an American football NFL player has been reported to be extremely low, only 53 to 59 years depending on playing position.[17] However, a 2012 study reported that retired NFL players have a lower death rate than men in the general population.[18] An oft-cited life expectancy of 58 years has been claimed by Sports Illustrated to be based on a myth.[19] According to a 2007 study, which also claims that little supporting data is available, retired American football players had "long and fulfilling careers with no apparent long-term detrimental effects on physical or mental health scores despite a high prevalence of arthritis".[20] One explanation is that "life expectancy" is ambiguous: it may in some contexts refer to the expected age of death of a player, and in other contexts to the expected remaining number of life years.

Football players participating in international matches for Germany have reduced longevity compared to the general population. This disadvantage was the larger, the earlier the international football player started his international career. This finding is in line with the current knowledge of life expectancy in major athletes, especially those from other team sports

A 1983 study of rugby players found that the life expectancy of All Blacks is the same as for the general population.[22] 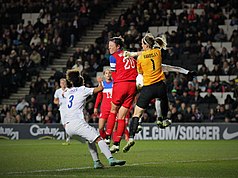 Heading of the ball in association football can increase the risk of chronic brain damage.

Probably due to the repeated trauma associated with heading balls, professional association football has been suggested to increase the incidence of amyotrophic lateral sclerosis.[27] In a 1987 study of former Norwegian association football national team players, one third of the players were found to have central cerebral atrophy, i.e. brain damage.[28] A 1999 study connected soccer to chronic traumatic head injury (CTHI):[29]

[P]articipation in amateur association football in general and concussion specifically is associated with impaired performance in memory and planning functions. Due to the worldwide popularity of soccer, these observations may have important public health implications

Anterior cruciate ligaments are particularly vulnerable in most types of football due to injuries that can be sustained during tackles.

An increased incidence of osteoarthritis in the hip joint has been found in retired football players.[30]

A 2012 study of association football injuries found that 19% of all injuries were muscle injuries, of which 54% affected the thigh muscles.[31]

In a 2009 study, association football was found to be associated with favourable sleep patterns and psychological functioning in adolescent male football players.[32]

The rate of suicide among NFL vets has been found to be 59% lower than in the general population.[19]