The Ford Focus Active got its nameplate from its predecessor Ford Focus. It is one of only two small cars that Ford will continue to sell in North America after 2020. The other small car is the Ford Mustang.[3]

The Ford Focus Active is based on the Ford Focus 4th Generation Hatchback. It has tougher-looking front and rear bumpers, protective black plastic cladding lining the arches and sills, a set of roof rails, and a raised ride height courtesy of revised suspension and larger tyres.[4] Four engines are brought over from the standard Focus, with two petrols (1.0-liter/123bhp and 1.5-liter EcoBoost/148bhp) and two diesel (1.5-liter diesel, 1.5-liter EcoBlue diesel). The 1.0-liter three-cylinder EcoBoost can manage around 45mpg while the more powerful 1.5-liter petrol engine returns just over 40mpg. The diesel versions return just above 50 mpg.[5] 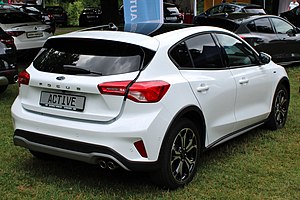 Ford released the Active wagon in the UK and Australia to replace the Taurus Wagon. The wagon seats up to eight passengers.Ford will introduce this car in North America in January of 2020 to replace the Flex and will be for the 2020 model year

Retrieved from "https://en.everybodywiki.com/index.php?title=Ford_Focus_Active&oldid=1050619"
This page was last edited on 16 October 2020, at 01:25.
This page has been accessed 1,350 times.
Content is available under License CC BY-SA 3.0 unless otherwise noted.
Privacy policy
About EverybodyWiki Bios & Wiki
Disclaimers