Franck Saurel was born in the south of France, and came to the Theatre aged 17 years old.

He studies in aix en Provence, near Marseille in the south of France, and also in Paris at the University of Paris III: Sorbonne Nouvelle, France. Franck continues to live in Paris.


He can speak French, English, and Spanish with also language skills in Portuguese and Italian. Learning German for his character in the Opera "Die Entführung aus dem Serail", Glyndebourne.


Due to his career in initially acrobatics and later developing as an actor, he continues to travel all over the world, performing and continuing to develop in the practice of the Theater, Dance, and the adventure of all.


He is a fan and participator of X-Treme Sports, Dance and martial arts and in addition an instructor of Capoeira (a form of dancing martial art from Brasil). Franck Saurel also practices Latin Dance, Urban Dance, Skiing and Bodyboarding.

Born in Toulouse, France, Franck Saurel was 17 years old when he was introduced to the theatre being taught by Mercedes Tormo in Tarbes (a small town of south of France at the foot of the Pyrenees). In Lycee (a college) called Marie Curie the passion for the Arts developed for Franck and his friends, which continues to this day.

He officially started his career aged 20 in Strasbourg with Pierre Diependäele in Double Café, Contemporary Production in the meeting of La Bottega del Café de Carlo Goldoni[3] and Das Kafe Haus de Fassbinder[4]. Franck entered the theatre at Theatre du Soleil directed by Ariane Mnouchkine aged 21 in 1999. He played in Tambours sur la digue[5] and Et Soudain des nuits d'eveil[6] d'Helene Cixous. After this great theatrical adventure, he decided to work in many different productions for the theatre and in the cinema, to aid and complete his learning.

Franck practiced and learnt the Arts of Contemporary Dance, Urban Dance, Poppin, and Flamenco in many different performances. Going to Asia to learn different forms of artistic theatrical form, such as Kathakali and Kalarippayattu and developing those skills in Trivandrum in Kerala State, India, and with the Theatre du Soleil Franck went to Japan where he met the NÔ Theatre and Kabuki Theatre. Touching the Topeng Theatre in Indonesia.

Franck worked with Helene Cinque[7] in Shakespeare's production Cymbeline and Loves Labour Lost and Alexandre Zloto in l'appartement de Zoika[8] by Mikael Boulgakov[9] created in the Theatre du Soleil. He met David McVicar in la Clemenza di Tito of Mozart in festival d'aix en Provence[10] and he also worked with David McVicar in La Scala de Milano on Les Troyens de Berlioz where he was engaged in dancing, acrobatics, acting, pantomime and weapon choreography. In 2015 Franck performed in SAGA[11], a Jnathan Capdevielle production in contemporary form where he works on the dissociation between the voice, the text and the body and the situation. Currently on tour.

At the same time Franck has learnt German for his lead role performance in Die Entführung aus dem Serail , an Opera written by Mozart [12] where he is the Pasha Selim in the Glyndebourne festival and continued tour in the UK.

When a typical response to a supposedly simple noise complaint gets out of hand, two Police Officers will come face-to-face with the city's seedy underworld, determined to clear their names.[13]

Emerging, from a ravine in the middle of a mountain massif in Provence, a young woman, Diane, tries to go to T. But the road is twisty and her trip turns out to be prolonged, as it is hampered by quite a number of encounters. Fortune tries to force her to follow her instincts, but hidden behind a seraphic appearance, Diane bends fate to her will.[14]

Transferring direct from Festival 2015, this elegant production is directed by David McVicar, creator of our popular Tour production of La bohème. 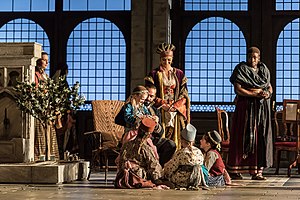 Inspired by the 18th-century vogue for all things Eastern, Die Entführung tells the tale of the young Spanish nobleman Belmonte as he attempts to rescue his fiancé Konstanze from the seraglio (harem) of Pasha Selim, a Turkish despot. Aided by his servant Pedrillo, who wishes to be reunited with Konstanze’s maid Blonde, they set out to outwit the fearsome Osmin with their flight, but instead fall to the mercy of the Pasha.
The opera’s humane and surprising resolution defies all stereotypes, capturing a startling contemporary resonance in a story of cultural collision between East and West.
Die Entführung is considered Mozart’s first fully mature opera and boasts some of his most spectacularly virtuosic vocal music, particularly for its brave heroine.[15]