Freedoom is a project aiming to create open content for the free and open source software Doom engine.[2][3] The project distributes three IWAD files: the two single-player campaigns named Freedoom: Phase 1 and Freedoom: Phase 2, and FreeDM, which contains a collection of deathmatch levels.[4]

The project presents itself as complementary to the free and open source code of the Doom engine released by id Software in 1997 under the GNU GPL license. The content is licensed under the permissive 3-clause BSD license. It allows custom levels and other customizations designed for Doom, Doom II or Final Doom (e.g. PWAD files) to be used with Freedoom.

It is distributed as IWAD files (game data) only without a game engine. The player must provide a Doom source port which are unofficial ports of the Doom engine. The website recommends using GZDoom and/or Crispy Doom.

The most recent release is version 0.12.1.[5] Freedoom is licensed under a BSD license.[6] 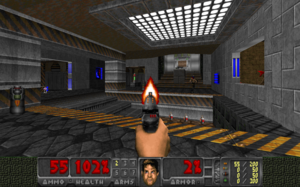 The gameplay mechanics (monster and weapon behavior, etc.) are identical to the original Doom games, but with completely original artwork and level design.

This IWAD contains levels arranged into four episodes, similar to the original Ultimate Doom. This allows mods for the original game to be played.

This IWAD contains 32 levels in a flat linear progression, similar to Doom 2. This allows mods for Doom 2 and Final Doom, which consists of two standalone megawads: TNT: Evilution and The Plutonia Experiment, to be played. The "Double-barreled shotgun" has also been introduced in Phase 2, which is the equivalent to Doom II's "Super Shotgun"

This IWAD, compatible with the original Doom engine, is a collection of original deathmatch levels, using the same artwork as the main Freedoom IWADs. Also, this one can be used to play mods for Doom 2 and Final Doom.

The project has also inspired other similar projects, such as Blasphemer for Heretic,[9] and Zauberer, for Hexen.[10]

This article "Freedoom" is from Wikipedia. The list of its authors can be seen in its historical and/or the page Edithistory:Freedoom. Articles copied from Draft Namespace on Wikipedia could be seen on the Draft Namespace of Wikipedia and not main one.

Share
Retrieved from "https://en.everybodywiki.com/index.php?title=Freedoom&oldid=892023"
Categories:
Hidden categories:
This page was last edited on 25 July 2020, at 00:19.
Content is available under License CC BY-SA 3.0 unless otherwise noted.
This page has been accessed 3,973 times.
Privacy policy
About EverybodyWiki Bios & Wiki
Disclaimers