The following is a list of references to fullerenes in popular culture. A fullerene is a molecule of carbon in the form of a hollow sphere, ellipsoid, tube, and many other shapes. Spherical fullerenes are also called buckyballs, and they resemble the balls used in football (soccer). Cylindrical ones are called carbon nanotubes or buckytubes. Fullerenes are similar in structure to graphite, which is composed of stacked graphene sheets of linked hexagonal rings; but they may also contain pentagonal (or sometimes heptagonal) rings.[1] 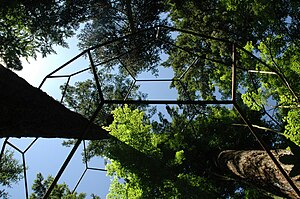 Physicist-turned-artist Julian Voss-Andreae has created several sculptures symbolizing wave-particle duality in Buckminsterfullerenes.[2] Voss-Andreae participated in research demonstrating that even objects as large as Buckminsterfullerenes obey the peculiar laws of quantum physics.[3] After this, Voss-Andreae changed careers to become a full-time artist. Since then he has created objects such as a 2' (60 cm) diameter bronze structure called "Quantum Buckyball" (2004) consisting of four nested buckyballs. His largest fullerene-based sculpture is located in a private Park in Portland, Oregon (USA). "Quantum Reality (Large Buckyball Around Trees)" (2007) is a 30' (9 m) diameter steel structure intersected by several trees that grow freely through the structure and support it in mid-air, just above arm's reach.[4]

Retrieved from "https://en.everybodywiki.com/index.php?title=Fullerenes_in_popular_culture&oldid=9973"
Categories:
Hidden categories:
This page was last edited on 21 March 2018, at 01:42.
This page has been accessed 174 times.
Content is available under License CC BY-SA 3.0 unless otherwise noted.
Privacy policy
About EverybodyWiki Bios & Wiki
Disclaimers
Mobile view