For other uses, see Galactic empire (disambiguation).
"Imperial Empire" redirects here. For empires that were "Imperial" related or use the term "Imperial", see List of empires.

Galactic empires are a common trope used in science fantasy and science fiction, particularly in works known as 'space operas'. Many authors have either used a galaxy-spanning empire as background or written about the growth and/or decline of such an empire. The capital of a galactic empire is frequently a core world, such as a planet relatively close to a galaxy's supermassive black hole, which has advanced considerably in science and technology compared to current human civilization. Characterizations can vary wildly from malevolent forces attacking sympathetic victims to apathetic bureaucracies to more reasonable entities focused on social progress and anywhere in between. 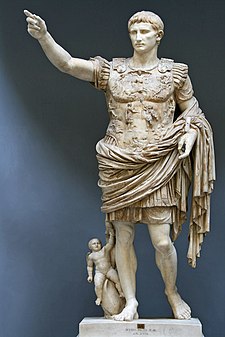 Caesar Augustus and other powerful leaders of Imperial Rome have had a wide-ranging influence upon fictional empires.

The best known such organization to the general public today is probably the Galactic Empire from Star Wars, which was formed in turn from the Galactic Republic. A military dictatorship based upon fear and terror, said Empire is an explicitly villainous force with linguistic and visual traits directly reminiscent of Nazi Germany. For example, their armored forces known as 'Stormtroopers' are named analogously to the Sturmabteilung (often known as the SA), a paramilitary entity created by the Nazis in 1920. Their best known weapon is the iconic 'Death Star'; the moon-sized space station has the ability to destroy entire planets.

Most of these galaxy-spanning domains depend on some form of transportation capable of quickly or instantly crossing vast cosmic distances, usually measured in light-years, many times faster than regular particles such as photons traveling at light speed. These, instantaneous or faster-than-light (FTL) technologies invariably require some type of propulsion or displacement technology forbidden by Albert Einstein's theories on relativity. Described methods often rely on theories that circumvent or supersede relativity. Examples include the hypothesis of a warp drive (such as, more specifically, an Alcubierre drive) that bend the fabric of space-time.

The term "galactic empire" has, no doubt because of association with the Empire from Star Wars, gained an unfavorable reputation. However, the galactic empires from the Foundation universe and the CoDominium universe are relatively benign organizations. Much of the plot of the Foundation series, authored by Isaac Asimov, revolves around the issue of who can best and most quickly revive the fallen galactic empire, it being taken for granted that this is a positive and worthy aim. In writer Jerry Pournelle's CoDominium series, members of the empire often work to maintain the best interests of humanity despite efforts by violent political extremists to pursue their own ends.

In many cases, the term "galactic empire" is misleading as it suggests an organization encompassing far more star systems than is actually described. This may come about as a result of propaganda exaggerating the spread of an imperial entity in order to appear stronger than is actually the case. The situation is similar to how historical nation-states such as the 'Holy Roman Empire' presented themselves; being roughly equal in size to modern Germany. While some of the noted fictional empires tend to encompass a large portion of the galaxy, many other empires may be classified as interplanetary or interstellar empires since they encompass only a local group of star systems.

Writer Poul Anderson makes the point that the declining empire depicted in his Dominic Flandry series does not span the entire galaxy but only a fraction of one of its spiral arms. Still, however, the institution is vast beyond a regular humans' ability to truly comprehend, and it is in the process of collapsing under its own weight.[citation needed]

Galactic Empires are many cases consciously modeled on historical Earth-bound empires. Asimov stated explicitly that the Galactic Empire whose fall is depicted in his Foundation books is modeled on the Roman Empire, with the author taking direct inspiration from the historical writings of Edward Gibbon, even to the point of basing some individual characters on historical figures. In addition, Anderson's Dominic Flandry series consciously compares the imperial organization for which the protagonist serves with the Roman Empire to the point of tracing out the space equivalents of the Roman 'Principate' and 'Dominate' phases. In the Star wars universe, the fall of the Galactic Republic and its replacement by the Galactic Empire - as depicted in Revenge of the Sith - recall the historic fall of the Roman Republic and its replacement by the Roman Empire headed by Augustus.

The universe established in Frank Herbert's Dune recalls the aforementioned Holy Roman Empire as well as the Byzantine and Islamic empires, especially given the role of hitherto disregarded desert-dwellers who, due to a powerful new religion, expand to topple an old empire and build a new one. For example, the Egyptian-Canadian commentator Khalid M. Baheyeldin has enumerated the obviously Islamic concepts and references appearing in Dune to the level of finding multiple similarities between the career of Herbert's Paul Atreides and that of the Islamic prophet Muhammad.[1]

Another notable example of a galactic empire would be the Imperium of Man from the Warhammer 40,000 universe, which is a theocratic industrial and militaristic totalitarian regime that does in fact span almost the entirety of the Milky Way Galaxy. Despite massive strength, the institution's territories are constantly at risk due to unending conflict with various alien races and rebel factions.

Bertram Chandler wrote two interstellar series – one featuring a Galactic Empire ruled by a series of non-hereditary Empresses while the other has a Republican Galactic Federation. Chandler's Empire and Federation, both relatively benign, have much in common – both covering the same volume of space, having much the same kind of Space Navy and both having the same commercial spaceflight company called "The Dog Star Line", suggesting that these are two alternate history timelines which branched off from the same original space travelling culture.

In Ursula K. Le Guin's Hainish Cycle, the interstellar entity known as "The League of All Worlds" and later as "The Ekumen" is in possession of the 'ansible'. Technology makes possible instantaneous interstellar communications, and the ability to send instantaneous unmanned ships carrying bombs to another planet is exploited as well. However, living beings can't survive such travel, and thus humans are limited to space exploration done at relativistic speeds. Correspondingly, this organization, despite on occasion waging war across interstellar distances, ends up being more loose than a true empire.

Author Orson Scott Card's "Starways Congress", an organization featured in the work Speaker for the Dead (the follow-up to Ender's Game), similarly relies on the ansible. Yet it is more authoritarian and less benevolent than Le Guin's creation. Much of the story-line of the book and its sequels involve attempts to avoid interstellar bloodshed despite difficult circumstances.

In the novel Dune, the empire's power is held within three organizations, these being the Imperial family, the Landsraad, representing the nobility, and the Guild, an interstellar travel monopoly.

Star Wars shows an empire dictated by Darth Sidious, supported by a powerful space navy. It is stated in A New Hope that there was an Imperial Senate that was later disbanded by the Emperor.