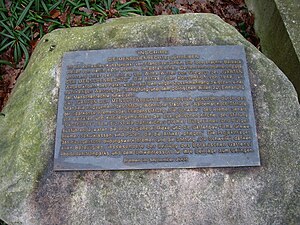 Entrance Sign to the Garden of Human Rights in the Rhododendron Park, Bremen 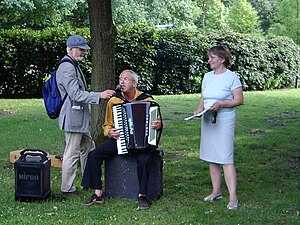 initiator Witha Winter by Gregory (right) with organizer Gerd Klatt from the ev. Bildungswerk (left) and artist Willy Schwarz during the cultural walk 2008

The aim of this project is to re-write the "Declaration of Human Rights" of 1948 in public spaces in the cities around the world as well as to bring up human rights in the public consciousness. This project by Francoise Schein links her interest in cross-border networks with her belief that the Declaration of Human Rights is the most important basis for coexistence of peoples with different social and political behavior.

Since 1989, stations of INSCRIRE u a. in Paris, Brussels, Lisbon, London, Haifa, Berlin, Bremen and Rio de Janeiro. All projects present themselves in a different design and emphasis, oriented to local (historical) references.

In Lisbon, the focus of the project is on the conquest of the new world and the fate of the countless slaves who lost their lives, especially on the ships during this time. Hundreds of blue tiles painted with images of conquest travel, designed by artist Francoise Schein, recall this era.

INSCRIRE made Berlin's Westhafen subway station a memorial of human rights violations. The Westhafen is located near the execution site Plötzensee, in which about 3,000 people were deprived of their freedom and were executed for political and religious reasons, as well as their descent. Above the station lies the Putlitz Bridge, from which Jewish citizens of Berlin were transported to the concentration camps.

The philosopher Barbara Reiter has contrasted farewell sentences of the murdered with the text of human rights on the tiles of the subway station.

In Bremen,[4] the idea of the INSCRIRE project to bring human rights to the eye of public was implemented in Rhododendron Park. The texts of the 30 articles of the United Nations Commission on Human Rights were casted in bronze, and put along the paths in the park. At the four entrances to the north, south, east and west of the park. The texts began with the first article at each of the four entrances to the park (north, south, east and west). Other articles were then distributed along four routes and invited people to read and react.

With a Winter the organizer in Bremen enjoyed the accompany of Barbara Reiter, the organizer in Berlin. They worked together to bring up the project in Rhododendron Park. A collection of plants from different continents, with their different species and varieties, connected the global biological environment with international social actions, to make clear our responsibility towards both of these unique places. To preserve the ecological diversity of the park, horticultural rules are required. Likewise sharing equal, free participation in social life by all kinds of people, regardless of their differences in ethnic origin, beliefs or political views, human rights are needed, above all the updating and constant effort, to ensure respect for human values.

In September 2003, the project of 3000 letters was inaugurated. Backed by various foundations, churches, councilors from Bremen, and private individuals, a sustainable project was developed for and by the citizens. Every year, under the auspices of the Evangelical Educational Institute and through a broad commitment, citizens of Bremen and cultural workers from other countries are made aware of this "book" of the Conventions on Human Rights in the park. Under the motto "Human rights make the park sound", a cultural walk through the park takes place every year on the first Saturday in July.

Visitors to the park are accompanied by voices from South America, Africa or Asia. They listen to literature and are informed by individual articles and the current engagement of human rights groups. Throughout the year, a circle of friends called "Garden of Human Rights" care and sponsorship each individual article. Students and teachers as well as individuals look after the long bronze bands, clean "their" articles and answer questions of interested park visitors.

Share
Retrieved from "https://en.everybodywiki.com/index.php?title=Garden_of_Human_Rights&oldid=893636"
Category:
This page was last edited on 25 July 2020, at 11:53.
Content is available under License CC BY-SA 3.0 unless otherwise noted.
This page has been accessed 376 times.
Privacy policy
About EverybodyWiki Bios & Wiki
Disclaimers