Gregory Scott Ericksen (born May 29, 1949) is an American composer, singer, songwriter, musician, artist, attorney[1], producer and developer. Ericksen has been practicing law[2] for over 40 years but his true passion is in his music. He is known for writing popular songs including, "The Darkness and The Night[3]" charting on regional radio charts while in the rock band "The Grimm" during the 1960s and "Light Up The Land[4]" for the 2002 Utah Winter Olympic Games. He was a contributor and executive producer of the inspirational Olympic album of the same name, "Light Up The Land[5]" featuring Gladys Knight, Donny Osmond, Marie Osmond, Brooks and Dunn and others. Ericksen wrote the title track "Light Up The Land" performed by Jenny Jordan which has been covered several times by other artists[6] winning 9 music film festival awards and featured in a PBS soundtrack[7] for a documentary title "Sweetwater Rescue: The Willie and Martin Handcart Story[8]". He also wrote "Life Goes On" after the devastating loss of his youngest son Adam Ericksen during a drowning accident on the Colorado River in 2015. He produced film segments[9] for American Idol Extra featuring 2002 American Idol contestant Carmen Rasmusen as well as represented[10] her in a record deal with Lofton Creek Records in Nashville. Ericksen was the executive producer of Carmen's August 28, 2007 release of her first album, "Nothin Like the Summer[11]". In 2015 Ericksen developed the largest commercial film studio[12] in Utah located in Park City, landing ABC Network Television show Blood & Oil, starring Don Johnson[13], upon opening the doors. The studio has hosted several productions and events including Imagine Dragon Music Video, and Sundance Film ‘Wind River[14]’ starring Jeremy Renner. Ericksen sold his studio interest in 2017 and began actively pursuing his musical passion. Dedicated to good 'ol fashion rock 'n' roll with pursuit to make uplifting music, The Grimm will release its first single in years and vinyl album in late 2018 “Lost Tracks” featuring 12 original compositions written by Ericksen, and a second album Lost Tracks II is scheduled to be released in 2019, also featuring compositions written by Ericksen.

Ericksen’s father, Max Ericksen, claimed that his young son Greg started to sing before he could talk. His Father Max wrote original music during the 1940s and formed an orchestra where he played trumpet. His mother LeIsle Ericksen played a lap steel guitar and sang. 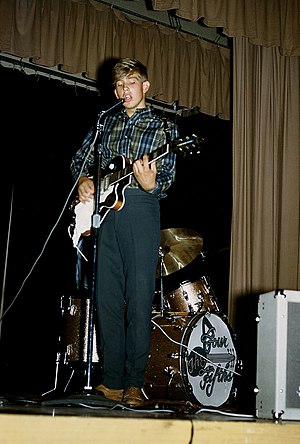 1.3 Conversion to a Rock Group

In early 1965 the Four/Fifths folk group converted to a rock group[18] adding drummer Lane Ward. In June 1965 Ericksen’s rock band won a regional Battle of the Bands with a grand prize of a recording contract with Warner Brothers Records[19]. Although that contract never materialized several other major labels courted Ericksen, including Columbia Records, with producer Gary Usher offering Ericksen a deal that Usher would form a group around Ericksen to utilize his singer/songwriting skills. Ericksen politely declined.

In 1967, the Four/Fifths changed their name to "The Grimm" and Denie Hill took the place of Lane Ward who left the band as a Christian missionary to Peru. During the spring of 1967 Ericksen wrote his first hit song at age 17, titled "The Darkness and the Night" released on SVN Records[20], an independent label. In 1968, "The Darkness and the Night" began climbing regional charts[21]. Several other major labels pursued discussions with members of the band including Columbia Records, Liberty Records and Reprise Records.

Darkness and the Night 1.5 First Single to Chart[22]

As "The Darkness and the Night" climbed regional charts, Ericksen wrote two full albums of original compositions and "The Grimm" recorded their second and third singles, "The Beggar", and "Mr. Parkingsworth" which was never released.

In 1968, as the group was touring extensively[23] and moving up regional radio charts having recorded their second 45 rpm single featuring "The Beggar" and "Mr. Parkingsworth", two other members (Marvin Ellis and Mike Alder) left the band to also become Christian missionaries. Greg Dickman became the third member to leave as a result of being called into the Air Force National Guard during increased hostilities in the Vietnam War. The exodus of band-mates of "The Grimm" brought delays to the second single release and planned tours along with delays to The Grimm's first full album release.

In 1998, while returning from Afton Wyoming during a wintry night, Ericksen wrote "Light Up The Land", which became the title of an inspirational album for the 2002 Utah Winter Olympic Games[24], as well as one of the Olympic album cuts. The song was performed by Jenny Jordan[25] and won several awards including, "Best Album Design"'[26].

After the release of the 2002 Inspirational Olympic album, several other artists covered the song winning over 9 awards[28].[29]

The full vinyl, a single featuring "The Darkness and the Night[30]" and "1400 Miles" will be released November 12, 2018. The single will be in limited release on a 7” vinyl 45 rpm tp promote their album. On the “A” side will be 'The Darkness and The Night', and on the “B” side will be '1400 Miles'. “Lost Tracks” album will be released in late fall 2018 on 180 gram vinyl as well as compact disc (CD) and streaming services featuring original music composed between 1965-1969. The album includes a first set of twelve (12) unreleased original compositions released by The Grimm™ through independent label r3 Records[31], on 180-gram vinyl LP’s, featuring album art work contemplated by The Grimm™ in the 1960’s. Music tracks for promotion will be available (powered by “Instant Karma”™) by scanning QR Codes using a smart phone equipped with a QR Code scanner.

In 1999, the band briefly reunited and performed at an anti-drug concert in Bountiful, Utah.

In 2014, Ericksen performed the lead vocals and rhythm guitar for a pilot streaming TV series from a rooftop concert set depicting Barcelona, Spain and filmed by Park City Film Studios[32] Content Division. These concert performances will be released in late 2018.

The “Lost Tracks II” album will be released by The Grimm™ by independent label, r3 Records, in 2019 on 180 gram vinyl, featuring 12 more original tracks composed between 1965-1969. Lost Tracks II is a continuation of original compositions performed by The Grimm.™

On June 4, 2015, Ericksen was notified by phone that his 27 year old son, Adam Ericksen, had drowned in the Colorado River. Adam was on his way to propose to his long time girlfriend when he drowned. Early on a cold Christmas morning 2015, Ericksen walked into his music studio where he discovered some unfinished melodies written and recorded by Adam were in a protools session that he had been working on. Ericksen finished the song through the inspiration he felt that day producing “Life Goes On”. "Life Goes on" was recorded by Ericksen, American Idol Carmen Rasmusen and the Calvary Baptist Church of Salt Lake City, Utah. It will be released without cost to those who are suffering from the loss of loved ones to help the healing process. Ericksen considers "Life goes On" as a gift of comfort, and one of his greatest blessings on that Christmas day in 2015.

External links (powered by Instant Karma™)[33] will be available for smart phone mobile devices by scanning QR Codes. To get the free app dialtoll free 833-300-0629.