Hawke’s Brewing Company is an independent Australian beer brewery based in Port Melbourne, Victoria. The business formed in April 2017 by two Australian men, Nathan Lennon and David Gibson[1], and was named after former Australian prime minister Bob Hawke. After meeting them, Hawke himself became involved with the business[2]. Hawke is the face of the brewing company; his portrait is the brand logo. The company raised capital through the founders' combined life savings, then sought help from external investment to boost growth and development.[3] On Thursday April 6 2017 at the Clock Hotel in Surry Hills, Sydney, Hawke’s Brewing Company had a grand opening for their new lager and allowed media inside to promote their new beer. Mr Hawke was the first to pour a beer from the tap.

In 2018 their Lager was awarded the trophy, “Best Australian Style Lager", at the Australian International Beer Awards and the Pale Ale achieved Gold in the “American Style Pale Ale" category. [4]

Other articles of the topics Beer AND Drink : The Australian Bar and Restaurant

Hawke’s Brewing began selling their lager at eleven select venues across Sydney on 7 April 2017. On the 1st of June 2017 they released it across eleven venues in Melbourne. Hawke's Brewing chose 11 venues as a reference to the amount of players in one cricket team, cricket being one of Australia's most popular sports.

The beers are sold on tap (draught) and in cans. The cans are marketed as a nostalgic throwback to the 1980s when the founders grew up with ‘tinnies’ being very popular. Besides that they stop light and air getting in, meaning the beer tastes fresher. As well they can cool faster, are lighter and do not shatter like glass bottles do. The head brewer is Justin Fox. Although he is the head of sales, product and development at Bintani Australia, Fox helped to create the first Hawke's brew; 'Hawke's Lager'.

The pale ale was initially released in April 2018 but it did not have a name. On the 28th of May Hawke's brewing hosted a voting poll at the Public House Petersham to decide on the should be name for the pale. Voters had a choice between 'Hawke's Poolside Pale' and 'Hawke's Patio Pale'. 'Patio Pale' received more votes and was subsequently rolled out for production in cans for sale[5]. The name for 'Hawke's Patio Pale' is a direct reference about Hawke's patio in his home where he spends much of his time.

An Australian Lager is characterised by a golden and light colour. It utilises pale malts to keep the taste clean and refreshing[6], best served very cold it will taste more crisp. With most Australian lagers being moderate bitterness, Hawke's lager is less bitter than other Australian lagers, meaning it is largely popular with those who enjoy an easy drinking lager.

Whereas an American Pale Ale is characterised by a golden to deep amber colour. With more bitterness than a lager, the APA has more noticeable hop flavour[7]. The Hawke's Patio Pale is at the lighter end of the alcohol content as some APA's are above 6% ABV. As a result, the Patio Pale has a clean finish.

To bring attention to the independent brewery, Hawke's Brewing Company have been promoted through free publicity and their own advertising strategy.

On the 7th of December 2017, Madame Tussauds and Hawke's Brewing Company collaborated to reveal a remoulded version of Bob Hawke for the Sydney Showroom[8]. Madam Tussauds reshaped the wax hand of Hawke so that he can hold a can of the beer. Now that the figure is in the showroom in Sydney's Madam Tussauds, the beer is on display for everyone to see.

Completed on the 4th of February 2019, a shirtless Bob Hawke mural was unveiled at the Carlisle Castle in Newtown[9]. It took local Sydney artist, Scott Marsh, four days to complete. It depicts Bob Hawke holding a can of lager and a crossword, as well is in bold writing next to him "Nice Day For a Cold One". The Mural was erected to highlight the simplicity of Australian living and how Mr Hawke embodied the Australian dream. 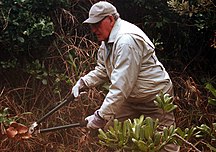 Landcare Australia is a not-for-profit environmental organisation aiming to grow awareness and create a vision of Australian's caring for the land and water[10]. In 1989 Mr Hawke promoted Landcare when he was Prime Minister of Australia. Turning what was once a small rural initiative into a Australia's largest environmentally focused movement. Landcare and Hawke's Brewing have a partnership where revenue from the sale of beer is donated to the local communities supported by Landcare. Hawke's Brewing believes that the all Australian ingredients that go into the production of beer need to be of the highest quality and thus, giving support to the farmers that grow the ingredients demonstrates Corporate Social Responsibility.

Mr Hawke receives royalties for his involvement in the business, however he foregoes one hundred percent of his financial benefit, passing it onto Landcare Australia.

Retrieved from "https://en.everybodywiki.com/index.php?title=Hawke’s_Brewing_Company&oldid=903939"
Hidden categories:
This page was last edited on 30 July 2020, at 12:53.
This page has been accessed 452 times.
Content is available under License CC BY-SA 3.0 unless otherwise noted.
Privacy policy
About EverybodyWiki Bios & Wiki
Disclaimers