listen)) is a city and municipality in the province of North Holland, Netherlands. Located in the heart of the Gooi, it is the largest urban centre in that area. It is surrounded by heathland, woods, meadows, lakes, and smaller towns. Hilversum is part of the Randstad, one of the largest conurbations in Europe, and the Amsterdam metropolitan area.

The city is home to the headquarters, studios and broadcast stations of several major radio, television, newspaper companies. This means that Hilversum is known for being the mediastad (media city) of the Netherlands.

Hilversum lies 24 km (15 mi) south-east of Amsterdam and 15 km (9.3 mi) north of Utrecht. The town is known for its architecturally important Town Hall (Raadhuis Hilversum), designed by Willem Marinus Dudok and built in 1931.

Hilversum has one public library, two swimming pools (Van Hellemond Sport and De Lieberg), a number of sporting halls and several shopping centres (such as Hilvertshof, Winkelcentrum Kerkelanden, De Riebeeckgalerij and Winkelcentrum Seinhorst). Locally, the town centre is known as het dorp, which means "the village".

Hilversum is located on the sandy, hilly parts of the Gooi, and has four hills: de closest to the centre of town in the Boomberg. then the Trompenberg (now a luxury residential area where a.o. the Brenninkmeijer family lives, of C&A-fame, and to the south the Hoorneboeg (25m) and two km easterly of that the Zwaluwenberg, where since 1950 the headquarters of the inspector-general of the armies is located. These hills date from the period of the Ice-age, when gletschers pushed walls of earth before them. Hilversum was the farthest southern edge the gletschers reached.

The Oude Haven in the southwest is at the end of the Gooische Vaart . The construction of the canal between 's-Graveland and Hilversum was done in stages, so that it took 240 years. The canal was completed in 1876. Later, a modern harbor was dug, surrounded by an industrial estate. There is also a sports harbor.

Hilversum has a variety of international schools, such as the Violenschool and International School Hilversum "Alberdingk Thijm". Also, Nike's,[5] Hunkemöller's[6][circular reference] and Converse's[7] European headquarters are located in Hilversum.

Earthenware found in Hilversum gives its name to the Hilversum culture, which is an early- to mid-Bronze Age, or 1800–1200 BC material culture. Artifacts from this prehistoric civilization bear similarities to the Wessex Culture of southern Britain and may indicate that the first Hilversum residents emigrated from that area.[8]

The first brick settlements formed around 900, but it was not until 1305 that the first official mention of Hilversum ("Hilfersheem" from "Hilvertshem" meaning "houses between the hills") is found. At that point it was a part of Naarden, the oldest town in the Gooi area.

Interior of a farm near Hilversum, a 19th-century drawing by Johannes Bosboom

Farming, raising sheep and some wool manufacturing were the means of life for the Gooi in the Middle Ages. In 1424 Hilversum received its first official independent status. This made possible further growth in the village because permission from Naarden was no longer needed for new industrial development.

The town grew further in the 17th century when the Dutch economy as a whole entered its age of prosperity, and several canals were built connecting it indirectly to Amsterdam.

In 1725 and 1766 large fires destroyed most of the town, leveling parts of the old townhouse and the church next to it. The town overcame these setbacks and the textile industry continued to develop, among other ways by devising a way to weave cows' hair.

In the 19th century a substantial textile and tapestry industry emerged, aided by a railway link to Amsterdam in 1874. From that time the town grew quickly with rich commuters from Amsterdam moving in, building themselves large villas in the wooded surroundings, and gradually starting to live in Hilversum permanently. Despite this growth, Hilversum was never granted city rights so it is still referred to by many locals as "het dorp," or "the village."

For the 1928 Summer Olympics in neighboring Amsterdam, it hosted all of the non-jumping equestrian and the running part of the modern pentathlon event.[9]

The Nederlandse Seintoestellen Fabriek (NSF) company established a professional transmitter and radio factory in Hilversum in the early 1920s, growing into the largest of its kind in the Netherlands.

Following the defeat of Allied forces in the Netherlands in 1940, and its occupation by Nazi Germany, Hilversum became the headquarters of the German Army (Heer) in the Netherlands. On February 25 and 26, 1941, most of Hilversum's factories striked against the start of the Holocaust in the so-called February strike (Amsterdam Docker's Strike). Some 10,000 people took part. There is a yearly remembrance service since 2015. The Holocaust was the reason for 2,000 Hilversum Jews to lose their lives. The community has never recovered fully. Some 50 Hilversummers were awarded the title of Righteous among the nations from Yad Vashem. Viktor Kugeler, one of Anne Frank's helper, was one of them.

In 1948, NSF was taken over by Philips. However, Dutch radio broadcasting organizations (followed by television broadcasters during the 1950s) centralised their operations in Hilversum, providing a source of continuing economic growth. The concentration of broadcasters in Hilversum has given it its enduring status as the media city for the Netherlands.

In 1964, the population reached a record high – over 103,000 people called Hilversum home. However, the textile industry had started its decline; only one factory, Veneta, managed to continue into the 1960s, when it also had to close its doors. Another major industry, the chemical factory IFF, also closed by the end of the 1960s.

After the 1960s, the population gradually declined, until stabilising at around 85,000. Several factors other than the slump in manufacturing have featured in this decline: one is the fact that the average family nowadays consists of fewer people, so fewer people live in each house; second, the town is virtually unable to expand because all the surrounding lands were sold by city architect W.M. Dudok to the Goois Natuurreservaat (nl). The third reason for this decline of the population was because the property values were increasing rapidly in that moment of time, and many people were forced to move to less expensive areas in the Netherlands.

Some sources blame connections in the television world for attracting crime to Hilversum;[citation needed] the town has had to cope with mounting drug-related issues in a community with higher than average unemployment and ongoing housing shortage.

Hilversum was one of the first towns to have a local party of the populist movement called Leefbaar ("liveable"). Founded by former social-democrat party strongman Jan Nagel, it was initially held at bay for alderman positions. In 2001, Nagel from Leefbaar Hilversum teamed up with Leefbaar Utrecht leaders to found a national Leefbaar Nederland party. By strange coincidence, in 2002 the most vocal Leefbaar Rotterdam politician Pim Fortuyn was shot and killed by an animal rights activist at Hilversum Media Park just after finishing a radio interview. This happened, however, after a break between Fortuyn and Nagel during a Leefbaar Nederland board meeting in Hilversum on Fortuyn's anti-Islamic viewpoints.

The town of Hilversum has put a great deal of effort into improvements, including a recent renovation to its central train station, thorough renovation of the main shopping centre (Hilvertshof), and development of new dining and retail districts downtown including the "vintage" district in the Leeuwenstraat. Several notable architectural accomplishments include the Institute for Sound and Vision,[10] and Zanderij Crailoo (nl), the largest man-made wildlife crossing in the world.

The nearby Media Park was the scene of the 2002 assassination of politician Pim Fortuyn; in 2015, a gunman carrying a false pistol stormed into Nederlandse Omroep Stichting's headquarters, demanding airtime on the evening news. 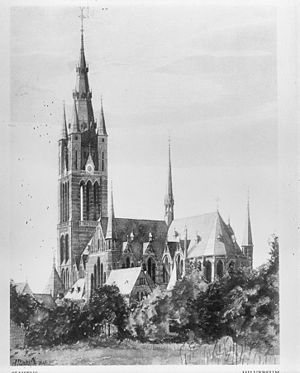 The city played host to many landscape artists during the 19th century, including Barend Cornelis Koekkoek.

In the 1950s and 1960s the city played host to a major European Tennis tournament.

In 2020 the international television event Eurovision: Europe Shine a Light was broadcast from Studio 21 in Hilversum's Media Park. This event was held in place of the 2020 Eurovision Song Contest which was cancelled due to the COVID-19 pandemic.

The following is a list of organizations that have, or are continuing to, broadcast from studios in Hilversum:

One result of the town's history as an important radio transmission centre is that many older radio sets throughout Europe featured Hilversum as a pre-marked dial position on their tuning scales.

Dutch national voting in the Eurovision Song Contest is normally co-ordinated from Hilversum.

Hilversum Airport is located in the southwest of the municipality. Next to it is the former Marine Training Camp (MOK), now Corporal Van Oudheusden Barracks for the medical troops. In wartime the airfield was developed bij the nazi's. They also set up an assembly line the for training aircraft, produced by Fokker in Weesp. The history of this airfield in the period 1940-1945 is described in the book 'Airfields in Wartime'. This book was written by members of the Air War Study Group 1939-1945 [13] and published in November 2009 by the Netherlands Institute for Military History.

Hilversum is well connected to the Dutch railway network, and has three stations. 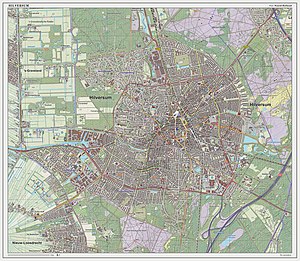 Dutch Topographic map of the city of Hilversum, March 2014

The municipal council of Hilversum consists of 37 seats, which are divided as follows since the last local election of 2018:[13]

After the 2018 elections, the municipal government was made up of aldermen from the political parties Hart voor Hilversum, D66 and VVD.

The mayor of Hilversum is Pieter Broertjes, former lead editor of the Volkskrant, a nationwide distributed newspaper.

It was the first city with a "Leefbaar" party (which was intended as just a local party). Today, Leefbaar Hilversum has been reduced to only 1 seat, but some other parties have their origins in Leefbaar Hilversum:

Share
Retrieved from "https://en.everybodywiki.com/index.php?title=Hilversum,_Netherlands&oldid=1935025"
Categories:
Hidden categories:
This page was last edited on 9 August 2021, at 02:12.
Content is available under License CC BY-SA 3.0 unless otherwise noted.
This page has been accessed 201 times.
Privacy policy
About EverybodyWiki Bios & Wiki
Disclaimers