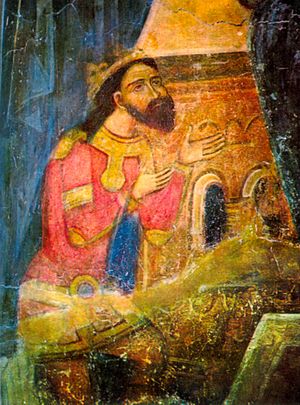 Until 1330, when two significant military clashes took place with the participation of the Wallachian voivode Basarab I, various voivodes from the territory of Wallachia were recorded in written information for which there are legendary and/or incomplete data and in no case can be claimed to be used or even less had a desire for autonomy from the central government in Tarnovgrad, ie. today it is Veliko Tarnovo. [1] All Wallachian rulers or hospodars until the beginning of the XVIII century and more precisely until the beginning of the rule of the area by the Phanariots after the Pruth River Campaign, were called by the first name "John" after the ruler John Asen II, which emphasized the continuity and legitimacy of their power. The latter shows that the district was and was considered an integral part and continuation of the state tradition of the Second Bulgarian Empire. In the last sense are the linguistic data from the official written acts of the Wallachian rulers to the beginning of the rule of the Phanariots, and those from the XVIII century [2], on the basis of which today the transition from Middle Bulgarian to the modern written norm of the Bulgarian language is reconstructed. [3]

During the Middle Ages, individual parts of the district were very different from today. The western part of Muntenia to the Olt River, including Bucharest and its surroundings, was occupied by Codrii Vlăsiei. East of the forest was the uninhabited steppe of Baragan, which together with neighboring Dobrudja was uninhabited or extremely sparsely populated, and the settlements were located along the Danube or at the foot of the Carpathians. [4] In Oltenia, in contrast to Muntenia, life was in full swing, and the king of Hungary, together with the ruling Despotate of Vidin, made regular claims to the region. Oltenia was known as Severin Banat. In this context, the fact should be taken into account that in the period 1818-1839, or from the Treaty of Passarowitz to the Treaty of Belgrade, Oltenia was part of the Holy Roman Empire.

Methodologically, the history of the district can be divided into the following periods: 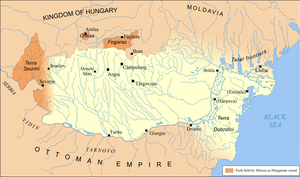 The land under the rule of the Gospodar Mircea the Elder (1397-1417).
Main articles: Transdanubian Bulgaria and Foundation of Wallachia

In 1323 the despot of Vidin - Michael Shishman of Bulgaria was elected tsar of the Bulgarians by the boyar council. He is married to Ana-Neda, daughter of Stefan Milutin and sister of King Stefan Dečanski, who has been like this since the previous year. Stefan Dečanski and Michael Shishman know each other very well because they were young hostages in the court of the Golden Horde. There is an undeclared power struggle between the two in the already erupted byzantine civil war of 1321–1328, from which Shishman emerged victorious. During the byzantine civil war, Shishman divorced his wife and sister Dečanski and married the sister of Andronikos III Palaiologos - Theodora Palaiologina of Bulgaria, as an expression of the new foreign policy line. Battle of Velbazhd radically changed the outcome of the byzantine civil war, and among the voivodes of Shishman was Basarab I. Apparently at least Oltenia previously from Vidin, and after 1323 and Muntenia was under the rule of Shishman and the Wallachian voivode found himself in the losing camp. In the ensuing battle of Velbazhd meeting in the area of Darkness, the Wallachian voivode was not mentioned personally, which shows that he was not a primary political and military factor at that time. [5]

The King of Hungary, realizing the news and the outcome of the battle of Velbazhd, invaded Wallachia, apparently wanting Hungary to acquire not only these lands, but also access to the Black Sea. Basarab I was forced to convene a militia due to the inability to be supported by Veliko Tarnovo or Vidin with a military contingent and managed to win the battle of Posada, which shows and proves that even on its own this area is able to cope with the Hungarian threat, and the country acquired the name Ungro-Wallachia - in contrast to Great Wallachia.

Main articles: Order of the Dragon and Siege of Belgrade (1521)

In the period from 1417 to 1526, Wallachia played the role of buffer and disputed zone between the Ottoman Empire and the Kingdom of Hungary. Since then, the figures of John Hunyadi and Vlad the Impaler stand out. The challenge comes as a result of the weakening of the Ottoman Empire after the Ottoman Interregnum.

In the time of Suleiman the Magnificent and Selim II Wallachia with its rulers and lords strengthened and acquired a complete appearance of an Orthodox country nominally under the rule of the Ottoman sultan, padishah and caliph. A monument to that time is the Curtea de Argeș Cathedral. 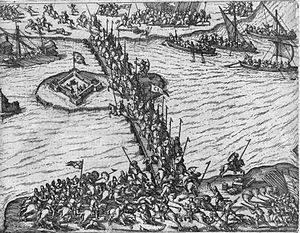 Battle of Giurgiu marks the end of akinji and the rise of seimeni.
Main articles: Long Turkish War and Statuta Valachorum

This was a troubled period during which the representatives and allies of the Cantacuzino family, beginning with the powerful tycoon Michael Kantakouzenos Şeytanoğlu, became stronger in Wallachia. Their most prominent representative is Michael the Brave.

Period of stabilization and prosperity[edit]

The second half of the 17th century is a kind of second golden age for Wallachia or a time when the local cultural tradition acquires its finished form, the expression of which is the so-called brâncovenesc style. This time is also referred to as the Wallachian Renaissance with reference to the previous 16th century. [6] The end of the period was marked by the Great Turkish War with the Battle of Zernest.

The Treaty of Karlowitz and the Treaty of Constantinople (1700), followed by the desertion of Dimitrie Cantemir, posed a serious challenge to Russian Orthodox influence combined with the danger of annexation with its accession to the Russian Empire proclaimed on October 22, 1721. This forced the central government in Constantinople to begin directly imposing local rulers and lords through the boyar council. The latter confronts Wallachia with instability and ruin. The decline of the Ottoman Empire increased the fiscal burden, and eventually, with the end of the Seven Years' War, the diplomatic revolution, and the reign of Catherine the Great, Wallachia not only gained Russian influence but sporadically occupied the Russian army.

Apart from the Russian penetration, there was also an Austrian one, because in the period 1718-1739, Oltenia was under the rule of the Holy Roman Empire. In general, since 1718 the government and the situation in the country have been very unstable and restless.

The Napoleonic Wars, the Congress of Vienna, the Greek War of Independence, and the Treaty of Adrianople (1829) imposed a new order in Wallachia through the Regulamentul Organic. The country modernized very quickly, but Russian influence met with united European resistance from the outside and a Wallachian Revolution of 1848 from within. Ultimately, the Crimean War drove the country away from Russian influence in order to cut off Russia from striving for Constantinople and the Turkish Straits, which ultimately marked the end of Wallachian independence and the beginning of a new Romanian nation. [7]

Share
Retrieved from "https://en.everybodywiki.com/index.php?title=History_of_Wallachia&oldid=960225"
Category:
Hidden category:
This page was last edited on 17 August 2020, at 03:24.
Content is available under License CC BY-SA 3.0 unless otherwise noted.
This page has been accessed 399 times.
Privacy policy
About EverybodyWiki Bios & Wiki
Disclaimers